Several people emailed me that Toshi-Aline Ohta Seeger had died at 91. She was Pete Seeger’s right hand for decades, his collaborator in writing songs, and his emphatic partner in progressive politics. 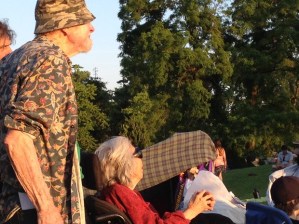 In fact, Toshi embodied Seeger’s treasured internationalism, having been born in Munich to an American mother and Japanese father. The family moved to the U.S., and the pair met and married during the war in New York. Sue Leonard recounts Toshi’s early history from an interview. Pete Seeger married a Red Diaper baby:

As a young child, Toshi lived in Woodstock in a small, narrow house where her family grew vegetables and kept chickens. No one, Toshi said, ate the chickens, just their eggs, because they were pets (unless her Uncle Al visited and they cooked one for his dinner). Later they moved back to New York City. Her parents, being left-wing activists (her father was a Communist and her mother worked for the women’s movement) sent Toshi to The Little Red Schoolhouse then onto the High School of Music and Art where she played piano and was a member of the first graduating class.

For decades, they lived together in a small house in Beacon, New York overlooking their beloved Hudson. Toshi kept Pete going, and she made films—her 1966 “Afro-American Work Songs in a Texas Prison” is in the archives of the Library of Congress. Pete and Toshi co-founded the Clearwater Festival, and saw it through to glorious fruition. Toshi was the one who actually knew how to sail, and that helped the Clearwater get established.

In mid June, I spent a blessed day at the Clearwater Festival in Croton, New York, and reveled in a late set by the incomparable Mavis Staples. When I saw her being helped up the steps to the stage, I wasn’t sure she’d be able to perform, and indeed the first few songs were largely carried by other singers. But then Mavis opened her mouth and a glorious sound came out. She’s still got it, and how.

As I was watching, I felt one of the festival’s ubiquitous golf carts pulling up in front of me on a small hillock overlooking the stage, and there, right next to me, were Pete and Toshi Seeger, come to see the glory of Mavis Staples. I took the photo above with my phone.

What went through the minds of these two old campaigners watching Mavis Staples? Via the Staples Singers, their association goes back to the 1950s. Can you imagine the countless Mississippi Summer evenings, church basement sing-alongs, pass-the-hat political rallies, and union fundraisers they must have shared?

Bob Dylan wrote “A Hard Rain’s A-Gonna Fall” in 1962, during the Cuban Missile Crisis. He famously said he didn’t know if the world was going to survive, so he created a song made up of first lines he’d likely never get to take further. It’s a string of vivid images.

Nick Loss-Eaton did something like that in creating “VFW Hall” for his Brooklyn, New York-based band, Leland Sundries, which gets its video debut here. “The song was written partly in Brooklyn and partly in northern Vermont,” Loss-Eaton says. “The language and imagery came first, and later I figured out what it was ‘about. I finally realized that the main character is a veteran haunted by his memories of World War II.”

Hence lines about a “march into Stalingrad,” where our narrator “carved my name into the barricade. I liked the lines about “restarting the furnace” and having a “mouth full of drywall” that “tastes like volcanic ash.” And then the chorus, “For half a buck I’d shut it down.” We don’t know what’s getting shut down, but this isn’t a need-to-know kind of song. It’s about a feeling, and it mixes images from memory and the present to call forth a complicated life.

Loss-Eaton tells me the video was filmed in Bushwick, Brooklyn in 2011, with Micah Friedman (guitar), Shane Kerwin (drums), and Mike Taco (bass). “Micah and Mike are no longer in the band, though Micah and I toured together last year as a duo in the west,” Loss Eaton says. “Sonically, we tried to introduce some noise, including an element of fog at the start with Micah tapping on the guitar strings with a drum stick and a guitar freakout at the end.”

The video was edited by Scott Variano and mixed by Jon Hildenstein.

Leland Sundries will be on an acoustic tour of the Northwest in September, and will have festival dates in the fall, when it’s also putting out a full-band live EP. The group records a full-length CD in October or November, to be released in 2014.

Loss-Eaton, by the way, is a music publicist who has turned me on to a lot of great stuff, including a new album from ace Irish folk expatriate Susan McKeown—just another New Yorker now.