NORTH HILLSDALE, NEW YORK—Performer after performer said from the Oldtones stage that this is their favorite summer festival, and it’s easy to see their point. Oldtones Roots Music Festival is run by and for musicians, and features the very best in old-time country, as well as a healthy sidelight in its racier offshoot bluegrass. 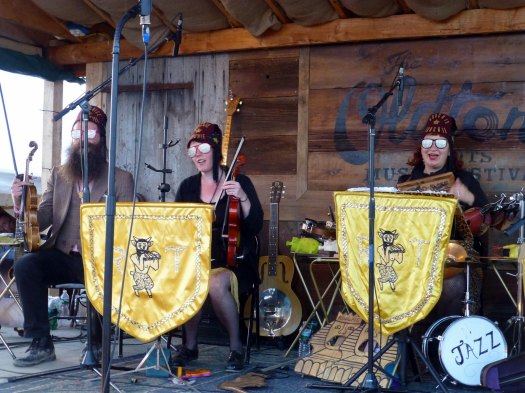 Every festival has its stars, and at this one it was Roochie Toochie and the Ragtime Shepherd Kings, explorers on the trail of the old weird America. Roochie Toochie goes way, way back, even before the historic recordings of the Carter Family and Jimmie Rodgers in Bristol, Tennessee in 1927. 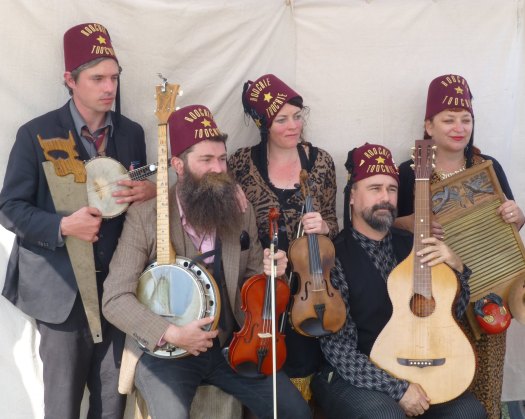 It’s 1910 again, a time when a person felt naked without a fez. (Jim Motavalli photo)

The Roochie Toochie focus is on music recorded on wax cylinders, and the group’s new album is even recorded that way. The cartoonist R. Crumb has maintained that electrical recording ruined music as we know it, so here’s his band. The group—made up of crack musicians, with multi-instrumentalist and singer Aaron Jonah Lewis a standout—has a repertoire of the half-heard songs from a nearly vanished era. And they perform them with a verve and theatricality that recalls vaudeville and makes something ancient new again. 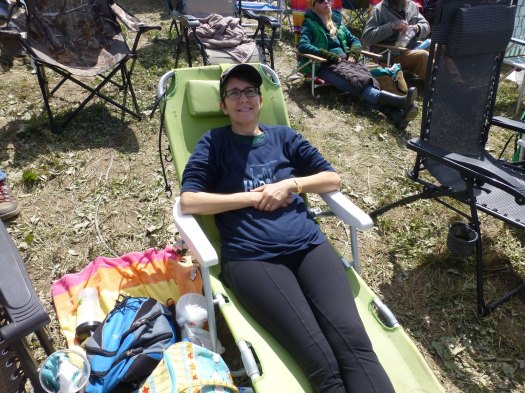 Highlights included “3000 Years Ago,” which featured costumed crusaders in the audience; “My Isle of Golden Dreams,” with tiny bubbles adding the Don Ho effects during the Hawaiian sections (Hawaiian guitar was an early American music craze); and “Doing the New Lowdown,” which I recall “Hotlips” Page covering ably. Here’s the group on video with “Ragging the Scale,” Edward B. Claypoole’s ragtime recording from 1915:


The group, wearing red fezes, is highly visual. Singer/fiddler Lindsay McCaw took over to demonstrate “17 (period) Dances in Two Minutes,” and there were live Egyptian priestesses and gorillas roving around. See them if you can. The group is currently touring Maine, from whence springs ukulele ace Tim Findlen.

An offshoot of Roochie Toochie, Corn Potato (“the eyes and ears of America”) is more in the old-time country vein, though it also swerves into the international music styles that are the forte of fiddler Aaron Jonah Lewis. He was incredible all weekend, in many different configurations. 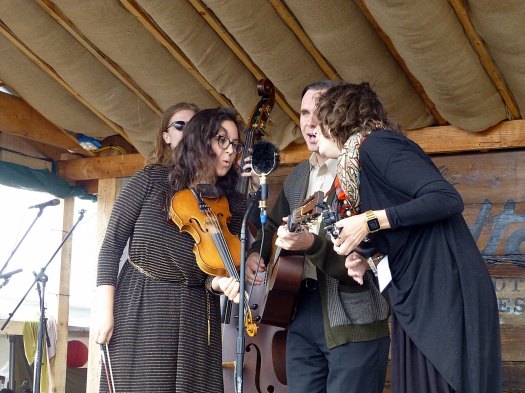 Bill and the Belles harmonize with style–the style of the 1930s. (Jim Motavalli photo)

Some of the best festivals feature groups you’ve never heard of, but discover at the event. I’d seen Bill and the Belles, at the Brooklyn Folk Festival, and they were a major find, too. Singer Kris Truelsen is a musical historian, and produces old-time radio shows at the Birthplace of Country Music Museum in the aforementioned Bristol. As a singer, he mines the intersection of 1930s pop—that smooth, smooth sound—and country. Belles Kalia Yeagle and Grace Van’T Hof complement the sound with smooth harmonies and, especially, Yeagle’s ace fiddle playing. 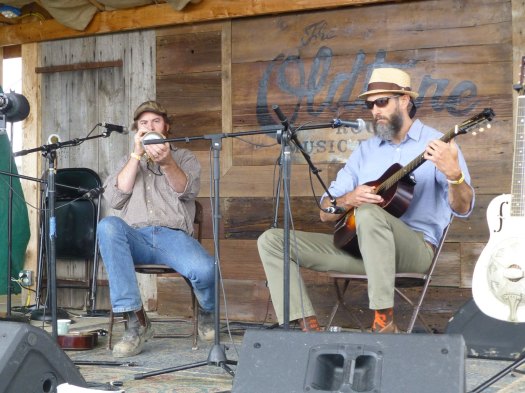 The Easy-Ridin’ Papas duo added pop/jazz touches, too, because they combined guitar with muted trumpet (in a style that Bix Beiderbecke would find archaic), and Hoagy Carmichael and Bob Wills tunes were featured. Kazoos came out. It went down easy. 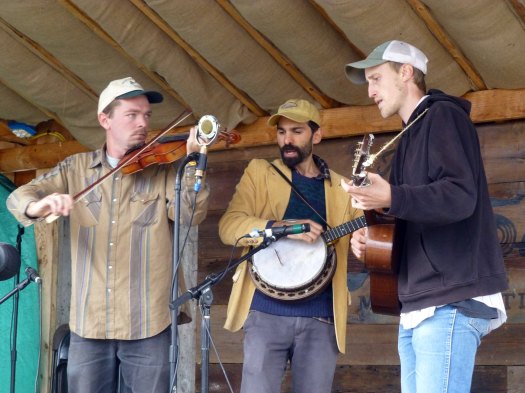 I’m a big fan of the Downhill Strugglers, a group intimately connected to the Brooklyn old-time scene and the Jalopy Theater there. Eli Smith, who plays banjo, runs the Brooklyn Folk Festival, and Jackson Lynch, one of the best fiddlers and a vocalist who recalls Charlie Poole at his raw best, frequently performs there. Here are the Strugglers on video, performing “Show Me the Way to Go Home”:


The group digs up a lot of rare songs, sourced from old 78s one presumes. An old sentimental cowboy song (a buckaroo saves the boss’ daughter from a rampaging bovine, but dies in the process) sounded to me like the source material for Woody Guthrie’s “Pretty Boy Floyd.” Stranger things have happened. Windham Baird of the Wild Goats later performed an old tune called “Palms of Victory,” which Bob Dylan turned into the practically unchanged “Paths of Victory.” 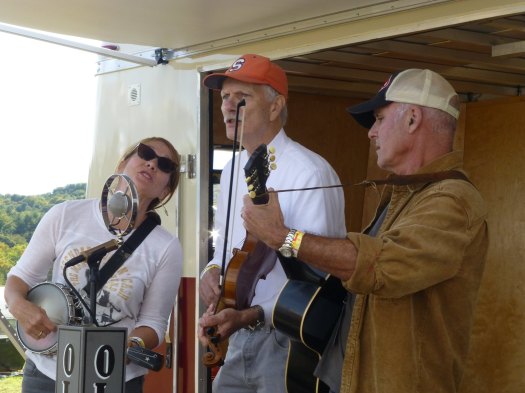 Speaking of Baird, he joined with Lynch later on the side stage to sing “I Got Your Ice Cold Nugrape,” based on the rare recording from 1926 by the Nugrape Twins—about whom very little is known. But it’s a great ad for grape soda. Moonshine Holler, which sometimes adds a member and becomes Run Mountain, is also wonderful at reviving little-heard material. 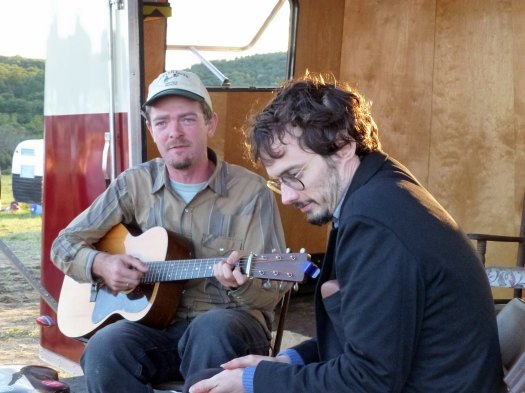 The Strugglers frequently perform with John Cohen, formerly of the New Lost City Ramblers—their predecessor in urban old-time. Walker Shepard completes the band on a variety of instruments. Here they are essaying “Show Me the Way to Go Home,” on video: 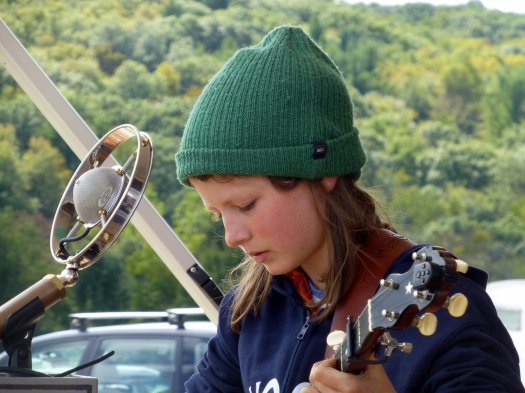 Bluegrass was well represented at Oldtones with Karl Shifflett and Big Country Show, plus The Feinberg Brothers and David Davis and the Warrior River Boys. I missed the Bash Bish Bluegrass Band. A highlight of Shifflet’s set was “Lonesome Road Blues” a la Snuffy Jenkins, from banjo player Brennen Ernst. What a player, with a great swing feel. Later he switched to guitar and began playing like Django on “Lady Be Good.” 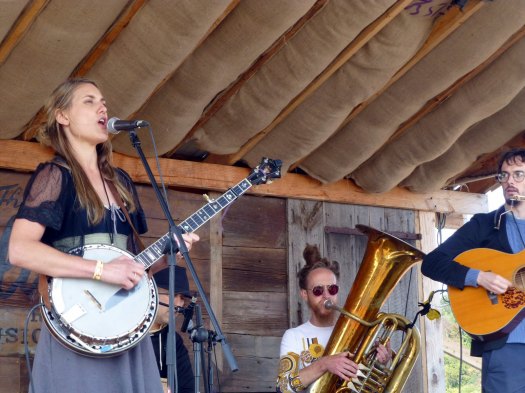 The Wild Goats, formerly Dubl Handi (but now with a tuba), were delightful. Banjo player/singer Hilary Hawke is writing her own (very good) songs now, and still digging into the tradition. Baird gave her some sage advice: “If you tune with that capo on, you’re going to get fret wear.” Musicians, take note. 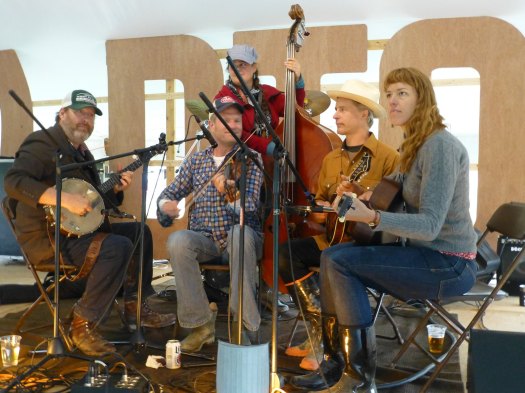 Other valuable players, heard in different combinations, included Tamar Korn (who must have heard Sophie Tucker at some time in her life), Caleb Klauder, Reeb Willms (the latter two making up a great duo), and the wonderful Jesse Legé—the Cajun contingent, along with Chas Justice and the Revelers. 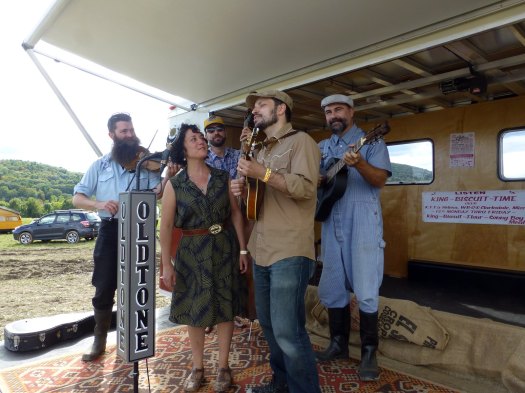