I’m really getting into this house concert thing. What’s not to like? The event I went to this Sunday in New Haven, Connecticut event was convenient to get to, comfortable (I was in the front row), inexpensive, and featured one of my favorite bands in a relaxed setting.

Girl Howdy (only pedal steel player Karen Sarkisian is out of the frame).

Both have multiple affiliations. Williams is in rockabilly band Lil Bee Dee and the Doo-Rites, plus zydeco band Slippery Sneakers; Bradley plays with her husband in old-time duo Moonshine Holler, leads juke-joint band The Twangbusters, and gigs with old-time god Bruce Molsky. When they can, they play as Girl Howdy, a band that goes back more than 10 years.

The repertoire is original, plus the best of Webb Pierce, Hank Williams, Kitty Wells, Connie Francis, Porter Wagoner, Loretta Lynn, the Davis Sisters (who contributed a tongue-twisting Christmas song) and many more. 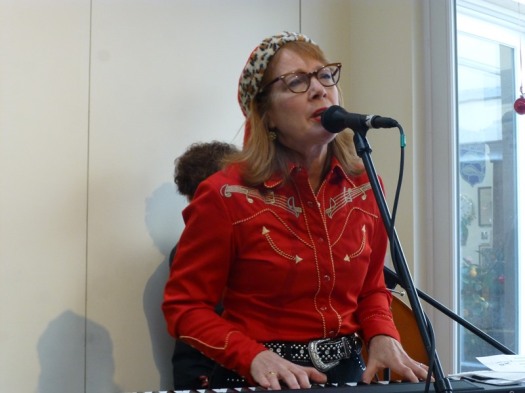 Special mention should be given to the minimalist drumming of Jeff Potter (one drum, two brushes), the bass playing of Lilian Fraker, and the totally in-the-groove pedal steel of Karen Sarkisian. The latter is in my dream country band forever.