Michael Hurley made a big impression on me—a “folkie” who somehow transcended the genre, who’d listened to everything and somehow absorbed into a unique style (the way Bob Dylan did). He might have been one of “Woody’s children,” but—unlike someone like Ramblin’ Jack Elliot—he danced to his own muse.

As good as it gets, but all Hurleys as worth the money.

Armchair Boogie (1971) was the second album Hurley made and the first I heard, probably within a couple years of its release. I was just starting out as a novice radio guy at WPKN-FM and a DJ, Ed Michaelson, played “Sweedeedee.” It was about a relationship, and it was about New York in a very real way, and it alternated spoken word passages with beautifully descriptive verses and chorus that got stuck in your head. Mississippi John Hurt was in there somewhere, happily co-existing with Cajun music, old-time jazz and country, and lots more, but it was all blissfully absorbed into Hurley’s unique kaleidoscopic world. 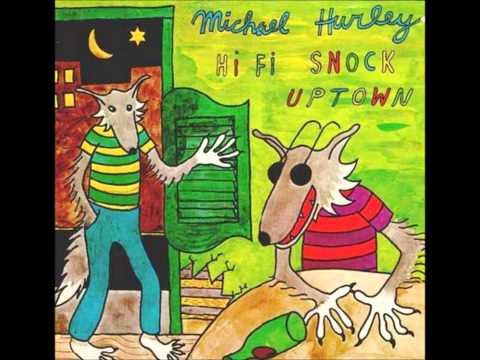 The third album and the second on the Youngblood’s Raccoon label via a clearly clueless Warner Brothers.

Apparently, Hurley used to go up to the roof of his Village apartment, from where you could sometimes see people flying kites in Washington Square, and he could tell by the way his little woman (who gave him a lot of trouble sometimes) washed the clothes that her cooking “must be fine.” 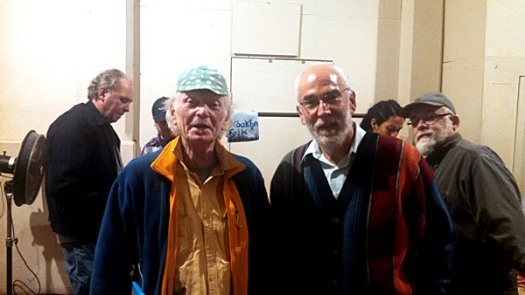 Hurley painted his own cartoony album covers (to this day), often starring his alter egos Boon and Jocko, and he created a whole world populated by werewolves, jungle pigs and working-class guys who fought with their girlfriends who liked to unwind down at the local tap room. A sometime associate of Peter Stampfel and the Holy Modal Rounders, he created a stone classic with them (not to mention Jeffrey Frederick and the Clamtones) called “Have Moicy” that came out on Rounder in 1976. 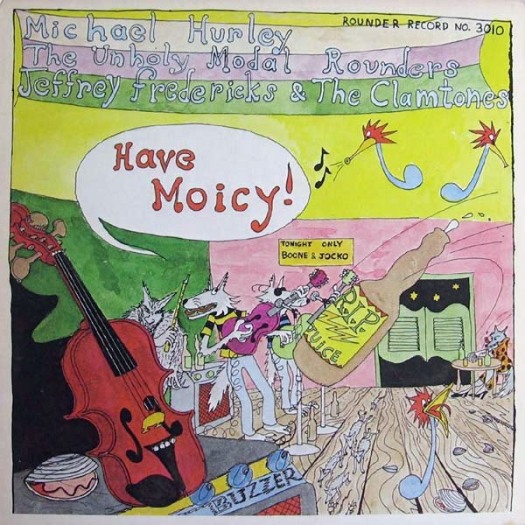 Hurley meets the Rounders halfway, and both win.

After two albums on Raccoon (a boutique label brought to you via The Youngbloods) and his Rounder period, Hurley’s albums began appearing on small labels, and became increasingly hard to find but the quality didn’t waver. He never made a bad album, or wrote a bad song.

All this is prologue to my finally interviewing Michael Hurley on WPKN and then seeing him perform in the flesh the next week at the wonderful Brooklyn Folk Festival at St. Ann’s Church in Brooklyn Heights. How did I miss this great old-time music celebration, now in its seventh year? The Friday night lineup included one Jackson Lynch, who looked like Justin Timberlake but sounded like Dock Boggs, a brother duo called The Horse-Eyed Men who outdid The Avett Brothers in simpatico sibling rivalry (and had great complementary voices and songs), and Jerron “Blindboy” Paxton, who was truly great, and could fit right into the Carolina Chocolate Drops to replace Dom Flemons.

And then there was Michael Hurley. His electric guitar cord was shorting out, but at 74 he was otherwise intact and in fine voice. He did “Sweedeedee” and “Portland Water,” told a few stories, charmed the audience, and then was gone too soon.

A few days earlier I’d interviewed him on WPKN. I was uncharacteristically nervous. I never get nervous. Put Taylor Swift or Ed Sheeran in front of me and I’d be totally cool. Hurley thinks about stuff before he answers, so you get a bit of dead air. But he’s got the driest sense of humor. I told him I’d see him in Brooklyn and he asked me what color shirt I’d be wearing, so we’d recognize each other. “Mine will be blue,” he said.

He said he was never a member of the Holy Modal Rounders. He confirmed that he lives near Astoria, Oregon, and if you can figure out the lyrics to Jolie Holland’s “Route 30” you might know exactly where. He got animated when I mentioned Cat Power’s cover of “Sweedeedee,” but contrary to rumors she is not his daughter. Hurley is getting covered quite a bit these days, and his cult is growing. In Brooklyn, he merch was swarmed by 25-year-olds.

I got my best response when I asked Hurley about his influences. He reeled off a long list, and they were exactly the people you’d expect them to be, if you’re a long-term fan like me. Here’s a few he mentioned: Duke Ellington, Oscar Peterson, Art Tatum, Red Garland, Hank Williams, Lefty Frizzell, Moon Mullican, Lee Dorsey, Fats Domino, Allen Toussaint. Also polkas and Cajun music.