NEW HAVEN—For a city its size, New Haven, Connecticut has a pretty darned impressive music scene. There’s the annual International Festival of Arts and Ideas, which sometimes goes all avant-garde on you, a passel of clubs (Café 9 is a favorite—it really punches above its 30-seat weight) and now the State House.

The Proud Flesh in action. Sorry to blur you, Alexander. (Jim Motavalli photo)

This new space has a warehouse-type entrance off a parking lot, but once you’re inside it’s a compact layout with an open floor for standees, a few tables around the periphery, and a big bar. Don’t ask for food—they’ve got bags of chips, and that’s about it.

But there’s plenty of food for thought—the bills are really adventurous. I don’t know a lot of the acts, but almost all of them sound worth coming out for—even on a snowy night in February. 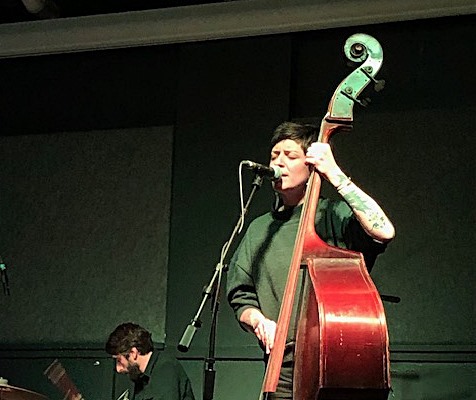 What drew me on one such evening was a triple bill of Proud Flesh, Ian Fitzgerald and the Brother Brothers. I didn’t know Fitzgerald, but it turned out he had my old friend Morgan Eve Swain (late of the Liz McNicholl Band and Brown Bird and currently of The Huntress and Holder of Hands), on standup bass. It’s an instrument in which she excels. (Liz herself was there to show support.)

The Flesh are local to New Haven, and they’ve been on my WPKN radio show. They have really good singers and songwriters in Pat Dalton and Alexander Burnet, and for this show had two guitars, bass and drums. Dalton left his trumpet in its case.

Dalton took most of the lead vocals on music that was a nice blend of punchy folk rock. He’s a good lyricist, but the band was loud and it wasn’t a poetry reading. This was also a problem with Fitzgerald’s set—on the basis of snippets I heard, he’s a wordsmith, too, but the message is a lot clearer on his records. The quieter songs were more effective. “Lillian,” written when he was a teenager, apparently, was a standout.

The Brother Brothers don’t carry a band around on the road, and don’t need one. These identical twins (hey, I’m one too!) are exceptional on fiddle, cello and guitar, and they switch off at will. Both are full-bodied, expressive singers, and excel at harmonies—drawing inevitable Everly Brothers comparisons.

But the Everlys, good as they were, didn’t write songs as good as “Cairo, Illinois,” “Bird in a Tree,” “Tugboats” and “The Banjo Song.” I’m telling you, this is the Americana band to see in 2019. It’s a quiet storm of folk genius. Even if they did forget the words. Here’s the video:


I’m going to keep an eye on the State House. I’m sure I’ll be back soon.