I take a lot of music photos, including for this blog. I think I can call myself a photo journalist, but I’m not a camera person. I don’t speak the lingo, pore over photo magazines buy multiple cameras. I mostly use small Panasonic cameras with nice Leica lenses. Portability is key with me, and the Panasonics fit into my pocket.

My tried and true Lumix goes everywhere, in my pocket. (Jim Motavalli photo)

But I was offered a test of a very high-end Swedish Hasselblad, a camera that held sway in the salad days of the professional photographer. I hired photographers in the 1980s and ‘90s, and they bought Hasselblads if they could afford them. They were versatile, allowing for the use of different backs, with 35-millimeter film and Polaroids for quick tests.

The camera came with a strap, a 110-volt recharger, and a 32-gigabyte SD card (plugging into one of two SD slots, a useful feature). For someone used to pocket cameras, it’s fairly heavy at 1.69 pounds without the lens. I took some photos using the RAW format, but found I lack both the computer and the software to handle such huge files. But the Hasselblad will also shoot in JPEG, or JPEG + RAW.

The photos looked good. Here’s one I took of my Saab:

I thought the Hasselblad was beautiful and beautifully made, but it’s way over my pay grade. I’m no camera expert, but I have friends who are. Tod Bryant of Norwalk, Connecticut took pictures for me at E/The Environmental Magazine, did corporate work for annual reports, brochures and advertising, and has taught photography for 30 years at the Parsons division of the New School University in New York City. His current interest is architectural history and preservation. 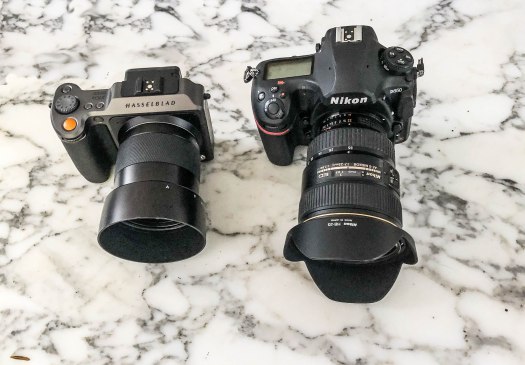 Tod’s conclusion: “I was amazed that there was almost no difference [in photo quality]. I tested both cameras indoors with window light at ISO 25,600 in program mode and the RAW files were virtually indistinguishable at 100 percent. The ‘Blad held more clean detail in some shadow areas. The Nikon’s JPEGs were very close to its raw files, but the jpegs from the X1DII were noticeably darker and they had a strong blue cast.”

For a second opinion I went to the comments section at B&H in New York, which sells the Hasselblad.

Dac Minh: “This Hasselblad is designed for those who love and enjoy the art of photography, old school if you will. If you came from film photography, you will like this. I find this camera connects to me like no other. When I held this in my hand, it makes me want to go out and take pictures. The camera somehow makes a boring looking landscape better in picture. There is an intangible thing that cannot be measured. You just have to experienced it and see for yourself. For the longest time, I hesitate buying the X1DII because of the price, no more. This camera is a keeper. It will go down in history as one of the classics.”

Joseph: “Such a beautiful camera. You could buy it just as a work of art, frame it and put it on the wall! But, I’d recommend using it instead to take some remarkably high quality photos instead. This is my third medium format camera and to be clear to anyone who doesn’t know the ins and outs of medium format, this is a crop medium format sensor. Still larger than a DSLR sensor but not as large as a true Digital MF Sensor like you find on an H6-100 or PhaseOne 100 or 150mp digital back. That being said, you still get much higher quality resolution from this than you do on a typical DSLR.”

Here are two images taken with the Hasselblad and Nikon, hand-held at 25,600 ISO. Tod’s conclusion: “The X1DII is definitely sharper and cleaner, but not enough to justify the price difference for most photographers. Some pros might need the Hasselblad for certain specialized uses.”

And now the Nikon:

If you’re a photographer like Dac Minh or Joseph, you can probably see the difference here.Me? I think the Hasselblad shot is slightly better and more evenly lit. But for my purposes, I’ll probably keep the Panasonic until it breaks, and after that I probably don’t need a camera at all. My iPhone 11 takes excellent pictures.