I had a lovely visit from banjo-playing singer-songwriter Kelly Hunt and her multi-instrumentalist partner, Stás Heaney. The pair, with Heaney playing fiddle, sat down at my kitchen table and recorded 40 minutes for my WPKN-FM radio show, with four songs from the Even the Sparrow album (which came out May 17 on Rare Bird).

Even the Sparrow is a delicate thing, with its heart and soul in the past. Like that sepia-toned Band album, it evokes an earlier and simpler America. “Men of Blue and Grey” is the true story of a Civil War photographer whose glass plate negatives were used to fix holes in his greenhouse roof. Hunt imagines the sun streaming through the leaves papering that roof, illuminating lives even as they are burned away.


Hunt records with an old calfskin tenor banjo, though it’s too delicate to take on the road. Inside she found a note reading, “This banjo was played by a man named Ira Tamm in his dog and pony show from 1920 to 1935.” Hunt looked for Ira Tamm, and so did I, but no trace can be found. Don’t worry about it; instead, see if you can conjure the wonders of that dog and pony show. I see a small white dog standing on its rear legs while mounted on a circling Shetland, the whole thing accompanied by the “tinkling banjo” that Donovan evokes in his “Epistle to Derroll.” 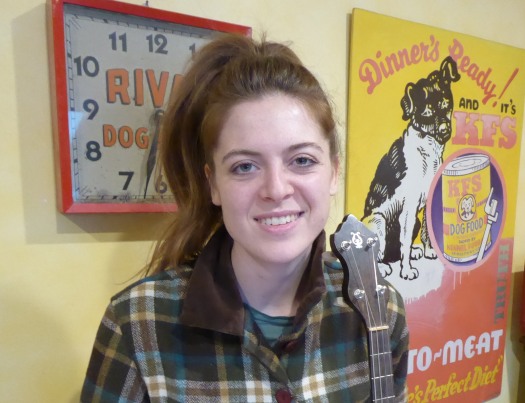 Kelly Hunt: looking at the world from both sides now. (Jim Motavalli photo0

Hunt tried out a bunch of careers, including French bread making and graphic arts; she was even a finalist for a Rhodes scholarship and accepted to medical school before settling down to her own distinctive brand of Americana. Maybe it’s in the blood—her mother was trained as an opera singer, and her father played sax. She grew up in Memphis, and is there another town with more of a colorful musical history?

Hunt told me Joni Mitchell was an early influence, especially on her singing style, and I’m reminded of “Furry Sings the Blues,” Mitchell’s near-journalistic tale of visiting the venerable bluesman in Memphis. I always liked it that she quotes him as telling her, “I don’t like you.” A bit of honesty there, as he only tolerated her for free smokes and liquor.


Hunt gave me the impression of someone who’s been too busy exploring the many options available to her to become a music industry obsessive. She makes the music that comes naturally to her, and if it speaks to us too, great. She and Heaney are working on a second album. Some label should snap it up.

The interview/performance will be heard at 9 p.m. EST on Tuesday, November 26. If you’re out of the area, you can listen at WPKN.org. For another time is the story of how her manager, Al Berman, came to represent two performers named Kelly (and Kelley) Hunt.