BROOKLYN, NY—It’s not possible to have a better time at a music event than I had at the Ninth Annual Brooklyn Folk Festival. Maybe if Mississippi John Hurt, Dock Boggs and Woody Guthrie were reincarnated and appeared as a song-swapping trio I’d be happier. 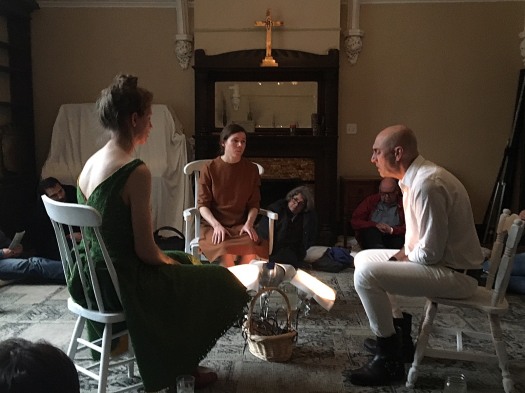 Five hours of the 300-year-old song “Queen Jane”? Why not? (Jim Motavalli photo)

Let me do this chronologically. I got to the festival Saturday afternoon. I’d have liked to see Anne Waldman read her poems, bask in the harmonies of Appalachian mountain duo Anna & Elizabeth, and swing to the Tennessee Stiff Legs, but life had other plans.

Instead, I walked in to Martha Burns doing old-time songs. Alas, she didn’t remember them all that well, but when she was on she was very good.

I love jug bands, especially when they’re doing the Memphis Jug Band’s “KC Moan.” And since I’ve never seen a jug band that didn’t do that song, I’m very happy. The BFF actually has two “house bands,” and this was the bigger one, Brotherhood of the Jug Band Blues. Both have Jackson Lynch, who’s a triple threat as guitarist, fiddler and vocalist. Equally good singers are Ernesto “Lovercat” Gomez and Ernie “Papa” Vega. Arturo “Jugman” Stiles is, well, on the jug. A highlight of the set was a great “Richland Woman Blues” by guest singer Samoa Wilson, who’s often seen with 60s jug pioneer Jim Kweskin. 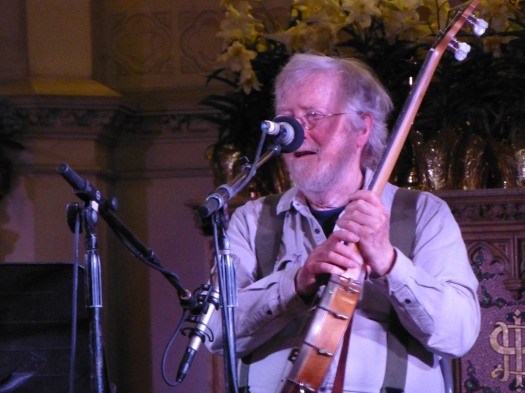 The tribute to banjo great Clarence Ashley (who brought Doc Watson to New York) was excellent, and held in conjunction with the Jalopy label’s release of the late performer’s first-ever live album. John Cohen, a member of the highly influential New Lost City Ramblers and a folklorist and photographer of note, was on hand to remember the 1961 Friends of Old-Time Music concert he helped promote (and at which he took the album’s cover picture).

Peter Siegel recorded the live album at Gerdes Folk City in 1963, and he was on hand, too, to play (very credibly) “I’m the Man Who Drove the Mule Around the World.” Another highlight was Willie Watson’s “Little Sadie.” Watson got his own set later, and he’s a man to watch in the old-time repertoire. I liked his “Hills of Mexico,” an old song with many variants. 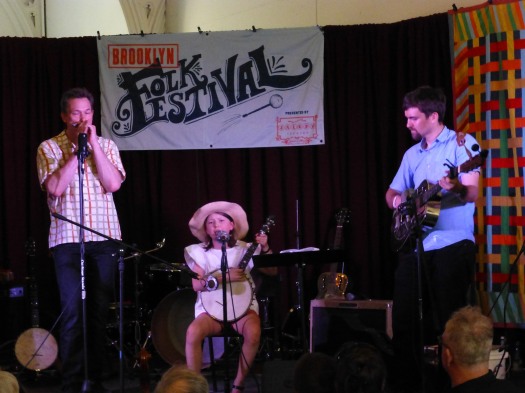 Brooklyn has the Parish Hall stage going along with the main stage, and I enjoyed seeing Little Nora Brown—who couldn’t have been more than 10—wailing away on some mountain classics. We’ll see her, all grown up, at the 19th Brooklyn Folk Festival. 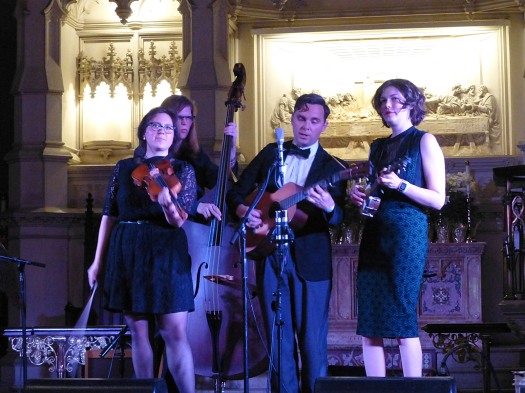 Bill and the Belles should be better known, and now that they’re getting out of Bristol, Tennessee that probably will happen. Kris Truelsen is a music historian with a master’s degree in Appalachian Studies. He produces Radio Bristol at the Birthplace of Country Music Museum, but he’s no mere archivist. As a singer he’s more pop than country, but we’re talking the popular music of the 1930s. He’s a 78 come to life, and has the style down pat.

Kalia Yeagle and Grace Van’T Hof are the Belles, and their harmonies give the band’s sound a richness that I haven’t heard elsewhere, plus Kalia is a killer fiddle player. If you missed them in Brooklyn, catch them—and lots of other great stuff—at the Oldtone Roots Music Festival in September.

A mashup of Odetta and Nina Simone would produce Amythyst Kiah, a major find for me. She is a vocalist for the ages, and you’re going to thank me for telling you about her. Accompanying herself in a repertoire that ably skipped around the music world but included the Mississippi Sheiks, Riley Puckett and the Reverend Gary Davis, the presentation was a bit spare (she also appears with the Chest of Glass band) but there was no denying that she possesses a world-class voice and knows how to use it.

I love versatility and the Texas-based Calamity Janes had three singers and three fiddle players. Plus a great sound.

I’ve written about the glories of Jerron “Blind Boy” Paxton before, and he’s fine on recordings but amazing as a solo live performer. He plays piano, guitar, fiddle and banjo, all with dazzling authority. And he’s a fine singer, too, with a suitably offbeat repertoire. I’d never heard “The Cat Came Back” before, but it’s a song written by Harry S. Miller in 1893. Funny, too. Here’s a version on video:

The day ended—for me, the festival continued on its merry way—with Reverend Billy and the Stop Shopping Choir, a group that wraps its activist message in some of the best gospel singing around. It’s like some kind of cosmic collective.

The other house band is the Downhill Strugglers, featuring not only Lynch but also Eli Smith, the festival’s main organizer and also its master of ceremonies.

John Cohen is a Struggler, too, and the band has a new album called The Lone Prairie. The album has the spirit of those old Holy Modal Rounder dates, and sounds like it was recorded through one of those horns favored by the RCA dog. The Rounders’ Peter Stampfel was on hand, too.

OK, another great find: Meredith Axelrod. She came out looking like a 40s belle, but when she started singing the clock was set rather farther back. Like Paxton, she featured a song from the pre-recording era—1911. “The Hypnotizing Man” was deeply weird, and Axelrod gave it exactly the dramatic reading it deserved. So when she swung into “Come Take a Ride in My Airship,” it was par for the course.

Axelrod, who made a great live album of duets with Jim Kweskin, is a true original. Not just a singer, she’s a fine actor. See her live.

I didn’t know Queen Esther, but she was cosmically wonderful. Imagine Valerie June with a distinctly country edge and you’re close. She’s working on a song cycle about Cathay Williams, the black woman who somehow passed as a man in the Union Army after the Civil War—and then had the temerity to demand a pension for her work. Jeff McLaughlin, who accompanied her, is a fine guitarist.

Finally—for me—there was the Locust Honey String Band, one of my favorite old-timey ensembles, featuring the songwriting and harmonies of Chloe Edmonstone and Meredith Watson. Here’s a new song by Watson:

They were fresh from Merlefest, and have a new album coming out in June. Here’s a video of a Watson song that will be on it, with a title like “I Was Making Plans for Nashville, and You Were Making Plans for New Orleans.”

The Locust Honey String Band are one of my favorite old-timey groups. (Jim Motavalli photo)

As I was leaving I stopped by the Workshop Stage, where three singers–Anna Roberts-Gevalt, Elizabeth LaPrelle and Tim Eriksen—were performing five hours of the same 300-year-old song, “Queen Jane.” That would be a singular event anywhere else, but it was just part of the magic at the Brooklyn Folk Festival.

PS: Rick Massimo, author of I Got a Song: A History of the Newport Folk Festival, was in attendance though we somehow missed each other. Never mind, I got the book and will have him on my radio show. Newport has a rich history, and if you want to go this summer, buy your tickets now.