It isn’t every group that can say they got together “for the upliftment of the human spirit and to bring some dignity to our collective experience,” but it fits for The Levins (pronounced Le-VIN), a husband-and-wife team from Congers, New York by way of Berkeley. 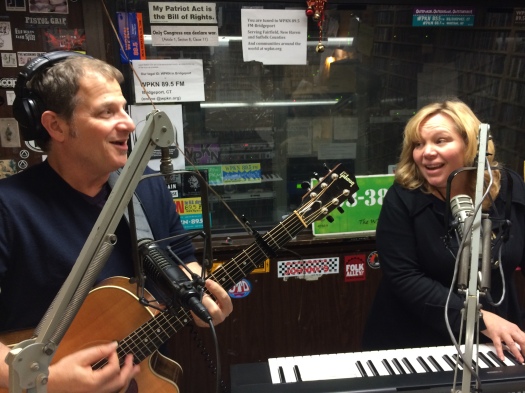 The Levins, on WPKN. No apologies for the live sound. (Jim Motavalli photo)

Folk duos don’t usually base their first CD (called 36), on “the legend of the 36 Lamed Vavniks: the silent saints who keep the world in balance with their selfless benevolence,” or record another one with lyrics by the 14th century Sufi master Hafiz. But The Levins have done both.

This is probably making The Levins look “difficult” or “inaccessible,” but nothing could be further from the truth. Listening to “My Friend Hafiz,” I was instantly drawn into a warm and sunny embrace that balanced profound lyrical truths with hooky choruses and melt-together harmony singing.

On the occasion of their sixth record, Trust, The Levins came by my radio show and offered up some of their music. Most groups perform skeletal versions of their records live, but The Levins sounded full-bodied and rehearsed. Ira and Julia Levin exude happiness and gratitude for being alive, which may have something to do with their profound Jewish faith.

Ira comes out of theater and folk music; he also made an album of 30s Harlem stuff, Fats Waller and the Cotton Club, with a band called Comfy Chair. Julia is a jazz cat and a child piano prodigy; her idol is British jazz pianist Marian McPartland. After they met in Berkeley, their influences came together as pop music of unusual sophistication. Their songs have more in common with the Great American Songbook than they do with Crosby, Stills and Nash, an influence they cite.

Listening to Trust, the antecedent that came through strongly was the two albums made by British duo John and Beverly Martyn, especially the Woodstock-recorded Stormbringer! I wasn’t surprised to learn that Ira is a John Martyn fan. Listen to “Primrose Hill” from Stormbringer! here.

I’m hesitant to over-analyze The Levins. They just make music you need to hear. Here they are on video at WPKN: