Jazz is where you find it. I was recently strolling down the main street of Columbia, Missouri and encountered a storefront called We Always Swing, with frequent live music (12 concerts a year), discussions and film series.

I live an hour from New York City, the jazz capitol of the world, but I don’t always want to take the time—and spend the money—to hit the nightspots there. But I can keep entertained right here in Connecticut. Here’s two shows I went to lately. 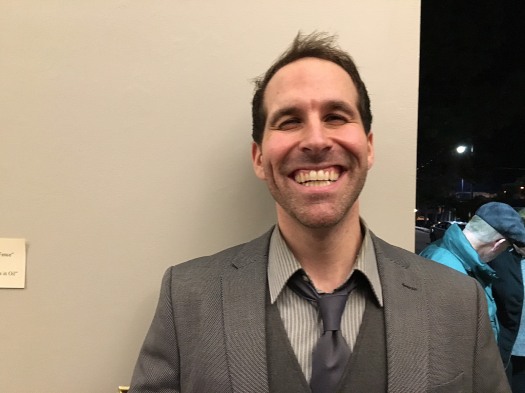 Marcus Goldhaber is a New York-based jazz singer who’s also a prolific songwriter who’s made four strong albums. In New York he often performs with a guitarist and a guest singer (including one of my favorites, Melissa Stylianou).

But I was pleasantly surprised to see him coming to Connecticut in a Sinatra tribute show sponsored by the Milford Arts Council in their cozy cabaret-style performance space—which just happens to be the former railroad station. Through some miracle of soundproofing or train schedules, we didn’t get interrupted all that much.

The Sinatra mantle was lightly worn; Ol’ Blue Eyes sang every standard in the book, and just about all male jazz singers are influenced by him. It was a night of the Great American Songbook with a tight trio, and the audience loved it. To duplicate it, check out his standard-laden first album, The Moment After (2006); to hear Goldhaber the songwriter, it’s A Lovely Way to Spend an Evening (2014).

More recently, I was back at the Wilton Library—in the Brubeck Room—to hear actual Brubecks. It was three of Dave’s sons, Chris, Dan and Darius, playing their dad’s music with a ringer (British saxophonist Dave O’Higgins). 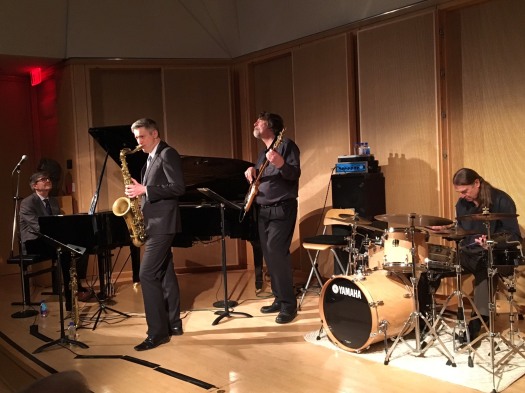 I interviewed Dave Brubeck many years ago when I was a reporter at the Wilton Bulletin. He was a laid-back Californian, a very gracious host, and a fine raconteur. At the time I was more into fiery stuff like Eric Dolphy and John Coltrane, but these days I’m also getting a lot of pleasure out of west coast players like Brubeck, Chet Baker, Stan Getz and Gerry Mulligan.

In Wilton, Darius—at the piano—was the raconteur, and he tells stories well (including one about Dan’s band being up for a Juno). The band played mostly older Brubeck compositions, including one Darius said was his first song ever, “Weep No More,” written in 1942 when he was overseas and missing his new wife. Here it is on video:


All four musicians played well. Darius channels the old man, but he also has a fair amount of Bill Evans in there, too. Dan cut loose on the last song, the inevitable “Take Five” (actually written by Dave’s alter ego, alto player Paul Desmond). O’Higgins shone on ballads.

I was especially taken with Chris Brubeck’s bass playing. I felt a sense of dismay when I saw him plug in an electric bass, but like Jaco Pastorius (there’s some overlap) he does something hugely original with it. His playing is very bright and busy, and it swings mightily. Chris also plays trombone, and on Louis Armstrong’s “Black and Blue” he took it out for a duo with Darius, nodding to Louis’ old sparring partner, Jack Teagarten.

This was the first night of the Brubecks Play Brubeck tour. The band is playing Dizzy’s at Lincoln Center in the aforementioned New York City March 30 and 31. It’s also doing a bunch of dates in the UK. That’s a tradition; here’s a review of the same band playing in London in 2014. Catch them if you can.