CROTON ON HUDSON, NEW YORK—At the Clearwater Festival, which came back this year after taking a breather in 2016, it’s either beastly hot or pouring rain. But on June 17, the day I could attend, it was cloudy, with only a couple hours of rain. Remembering the search for shade (which made the dance tent more tempting), it was actually better to be getting wet. 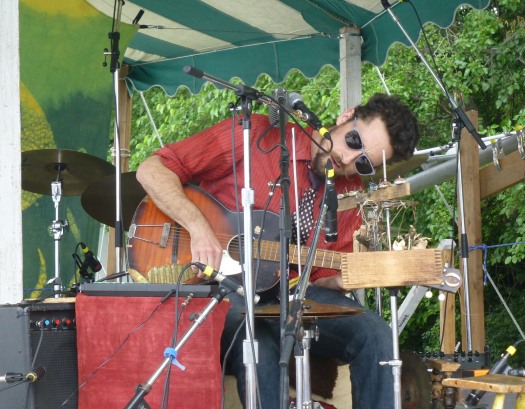 
And it was worth it, because the music was so good. I had The Suitcase Junket, a/k/a Matt Lorenz, on my radio show a few days earlier, and he confirmed that he found his guitar in a dumpster, cleaned the mold off, and has been playing the thing ever since. The program described him, accurately, as a “throat-singing, slide guitar-playing, one-man band.”

I’ve been reading Robbie Robertson’s Testimony, the section about the Basement Tapes, and it was a pleasant surprise when Mr. Junket performed “Tears of Rage.” As you may recall, Dylan wrote the song with Richard Manuel of the Band, who is remembered so well in the Mammals’ song “The Ghost of Richard Manuel.” I’m happy because I’m seeing the Mammals this coming weekend at the wonderful Caramoor American Roots Music Festival (along with Rhiannon Giddens, Sarah Jarosz and a whole lot more). 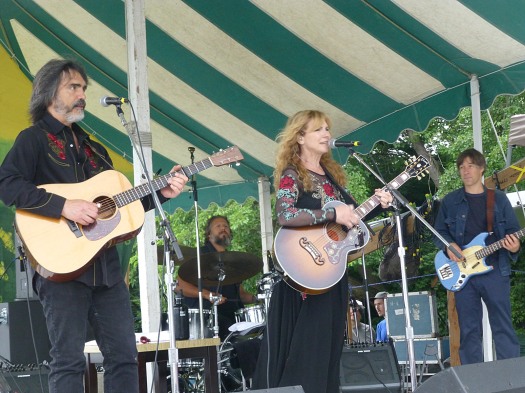 Larry Campbell wooed Teresa Williams with a Louvin Brothers mixtape. “And it worked,” she said. The Louvins’ “You’re Running Wild” was a highlight of their set, but really it was all good. Both are strong singers and songwriters—Teresa is a classic country belter, and Campbell is paging Johnny Cash. Add to that the fact that Campbell is a truly great guitar player, who references all of country history (as does Jerry Miller, the incomparable guitarist in Eilen Jewell’s band).

These two are the Porter Waggoner/Dolly Parton of their age, but Nashville no longer rewards such partnerships, alas. Classic country belters play at bluegrass festivals. 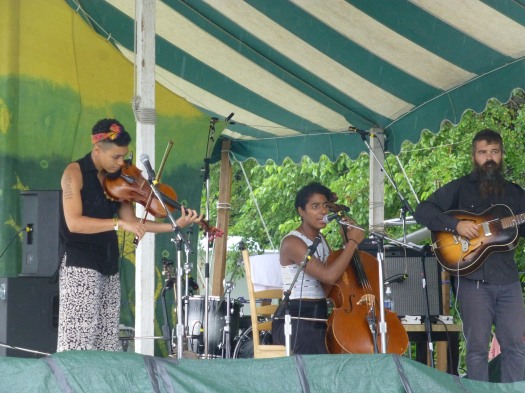 Leyla McCalla, the cellist/singer I first saw with The Carolina Chocolate Drops, is now on her own, and mixing Americana with Creole songs from her Haitian ancestry. She also had a crack band, and one of the highlights of the set was a fascinating duet with her fiddle player.

McCalla is a historian and a folklorist, so she does what any self-respecting cultural ambassador would do—explain the songs, put them in context, and translate the lyrics. 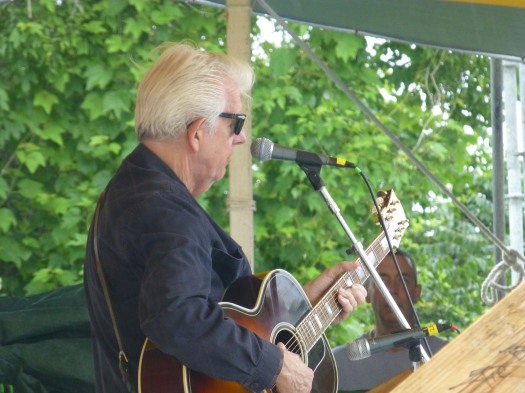 Nick Lowe was riveting, with just a guitar in hand. A new man in black? (Jim Motavalli photo)

I heard someone describe Nick Lowe as “Britain’s Johnny Cash,” and while that isn’t entirely accurate, they both dress in black and write and sing like geniuses. With just a guitar, Lowe was riveting—he was really singing well, and took us through “Heart for Sale,” Cruel to be Kind,” “When I Write the Book,” “Heart for Sale” and other modern classics. It wasn’t “folk,” it wasn’t “punk” or “new wave,” it was just good songs, very effectively delivered. 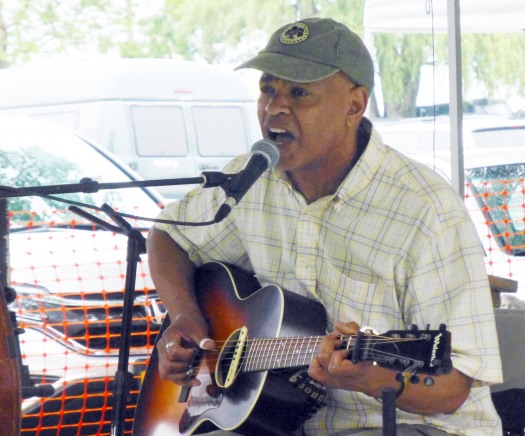 Guy Davis is a folklorist, too, though he finds fertile ground in the country blues. But rather than mining the old 78s, he writes great songs in that tradition—often with lots of contemporary flourishes.

The son of Ruby Dee and Ossie Davis, he could probably tell Hollywood stories if he wanted, but instead we’re set down on the crossroads somewhere. He’s an incredible guitarist and harp player, and one of my favorite singers. Good storyteller, too. 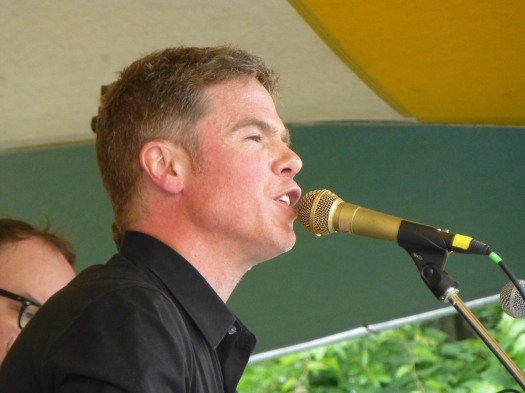 Josh Ritter was happy to be at Clearwater. Just happy in general. (Jim Motavalli photo)

Josh Ritter appears to be entering a fertile period. At Clearwater, he played a lot of newer songs. (My favorite was “Cumberland,” which is on his Sermon on the Rocks album.) And he appeared unbelievably, unconquerably happy to be doing what he was doing. With a broad grin that never left his face, he kept thanking the audience for being allowed to play at Clearwater.

The fans reciprocated. During the set, which I watched from behind the stage, I saw two women, with their children, mouthing every word of the lyrics. Later, I asked one about her love of Josh Ritter. “He’s brilliant, poetic, and he has a way of getting across political messages without being overtly political.” I’ll agree with that. He can sing “Girl in the War” for 30 minutes and I’d be happy. After the show, he agreed readily to an appearance on my radio show, so I’ll hold him to that. He was still grinning. 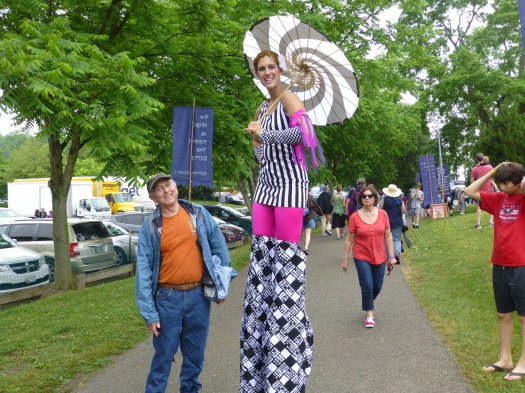 How’s the weather up there? Stilt walking is a lost art, except at folk festivals. (Jim Motavalli photo)

Some of the show is offstage at Clearwater, and I enjoyed a lady on stilts and Nate the Great, who juggled flaming torches and played a song on a sliding board. 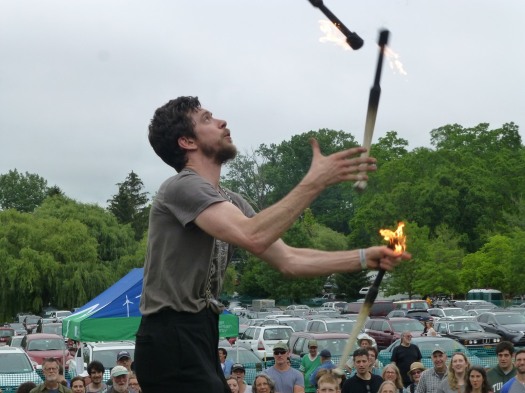 Juggling three flaming torches? Why not, all in a day’s work for Nate the Great. (Jim Motavalli photo)

I finished the night with two ace zydeco performances in the dance tent. Nathan and the Zydeco Cha Chas are black, and Jesse Legé and Bayou Brew are white, but their music has plenty in common. I’ve been fascinated recently not only by zydeco and Cajun music, but by the process that created it.

Here were these French people expelled from Canada’s Atlantic provinces by the conquering British in the 18th century, exiled to France, then resettled in—of all places—southern Louisiana’s swamps and bayous. 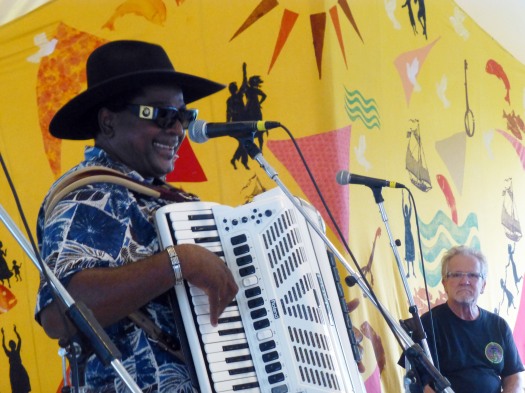 Nathan and the Zydeco Cha Chas. Their version of stage diving is a gentle stroll through the audience. (Jim Motavalli photo)

What a shock to the system! And yet they adopted and, influenced by the rich alternative traditions around them, created both a very appealing culture (French culture plus crayfish equals Cajun cooking) and incredible music.

Nathan is an extremely genial presence, given to strolling through the audience, furiously playing his accordion all along. I noticed Jesse Legé sitting at stage right, rapt, for Nathan’s entire set. The Cha Chas are the best there is right now, and if you can see them, don’t miss it.

Legé and his band, featuring three women, was on the same plane. They build up a huge head of steam on uptempo numbers, and get the dancers moving on ballads, too. They’re from Louisiana, but it appears they’re in New England and New York for most of the summer—the festivals come that thick and fast.

All in all, an excellent return for Clearwater. There was an air of celebration in the air, because Indian Point nuclear plant is shutting down, and the usual political and cultural activism was in the air. My favorite sign said: “Group Mime! Sing-a-Longs! Join Us on the Working Waterfront.”