KATONAH, NEW YORK—I’d previously been to Caramoor mostly for Americana events, so how would the sylvan glades take to the sounds of Coltrane, Monk and Miles? Just fine, as it turned out. Acoustic jazz is a natural sound, and it not only carried well when unamplified, but sounded right to the setting. 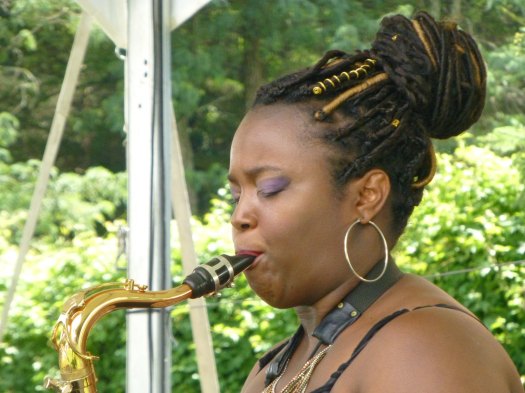 The Caramoor jazz festival was produced in cooperation with Jazz at Lincoln Center, and was all the better for it. On the bill were a series of acts I was unfamiliar with, but many were nurtured at JALC, and now the talent is reaching a wider audience. Camille Thurman, Riley Mulherkar, Christian Sands, Zaccai Curtis, Michael Mwenso, these are the stars of tomorrow. 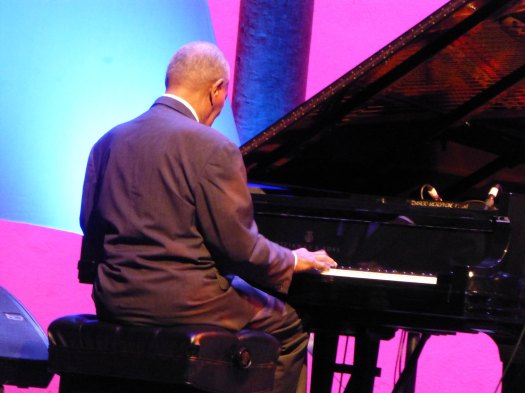 Pianists play with their backs to the audience, so here’s a shot of the back of McCoy Tyner. (Jim Motavalli photo)

The two acts I did know, McCoy Tyner and Mary Halvorson, could not be more different, but are widely varying roots from the same tree. Tyner was John Coltrane’s pianist in the critical years from 1960 to 1965 (as a very informed talk by Seton Hawkins of JALC explained), and Halvorson is today’s most cutting-edge guitarist. The former briefly adorned the open-sided Venetian Theater; the latter appeared in a more intimate setting—the Sunken Garden glade, with bassist Stephan Crump.

Mary Halvorson was heard in duet with bassist Stephan Crump.

The jazz setup is much the same as Americana—concurrent shows in the open air, some on stages, some in forest clearings, leading up to a more formal gala show in the evening. Luckily, the weather cooperated, as it always seems to do when I’m at Caramoor. 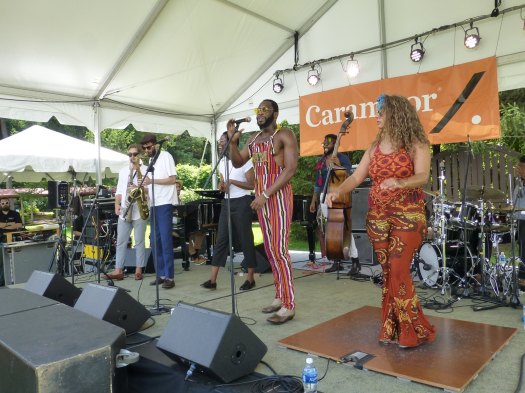 The muscular Michael Mwenso came with his own dancer. (Jim Motavalli photo)

Michael Mwenso and the Shakes offered the very muscular leader with an international cast from South Africa, Madagascar, France, Jamaica and London. An in-house dancer provided appeal, and the group boasted strong singers and players. The only thing they lacked was good material; my mind wandered a bit when the songs started to sound the same. 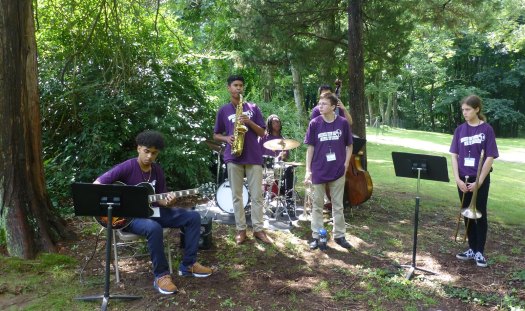 I wish I’d heard more of Camille Thurman, who was gigging with the Darrell Green Trio. She has a firm, Coltrane-derived tenor saxophone sound and a chocolatey voice somewhat reminiscent of Dee Dee Bridgewater or Jean. She’d sound good, as Dee Dee and Jean did, chanting about the creator on those 1970s spiritual jazz records. 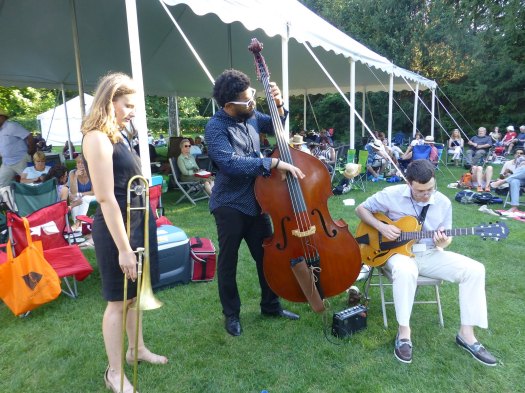 Halvorson and Crump were suitably challenging. The two, who have recorded together, essayed a pair of intense, rapidly shifting duets. If I’m not mistaken, they were called “Emerge” (by Crump) and “In Time You Yell” (by Halvorson). Her guitar was played through some effects pedals that bent the notes in appealing ways. 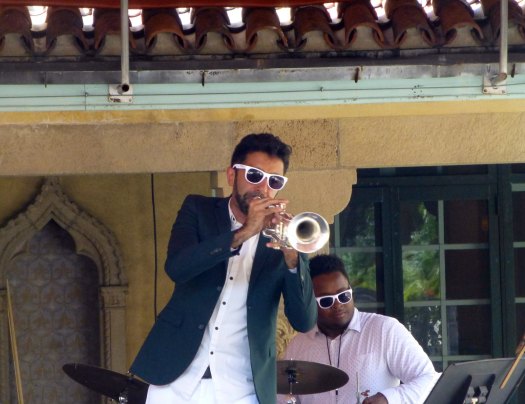 My camera was running low on battery power, so I didn’t get video of the Caramoor  performance, but here the pair is at New York’s great Cornelia Street Café playing “In Time You Yell”:

My two big discoveries for the day both featured Riley Multherkar on trumpet. He led a program with a small group called “In the Land of Oa-Bla-Dee.” If you’ve never heard that particular Dizzy Gillespie song, you owe it to yourself, because it’s the strangest thing in his canon. Here’s a video:


The group played “Salt Peanuts,” “Be Bop,” “Tin Tin Deo” and other Dizzy classics, and Multherkar was on fire whatever the period. He plays very fast, but also very cleanly, fully articulating every note. And he was a good guide to Dizzy’s music, too. I’d never heard “Pickin’ the Cabbage” before. 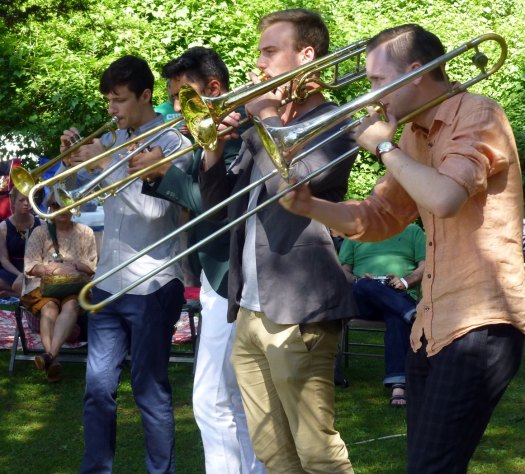 The Westerlies offered intricate arrangements of their own music and some well-chosen covers. (Jim Motavalli photo)

Multherkar must have had track shoes on, because almost immediately after the Dizzy show he was in one of the glades as a founding member of the Westerlies. I love the idea of two trumpets and two trombones, all played by high school friends who grew up in Seattle and studied with Wayne Horvitz. The arrangements were intricate, and they played them without sheet music—a lot of woodshedding in evidence there.

The music was quite varied, including a group of songs recorded by the Golden Gate Jubilee Singers. “I Was Born 10,000 Years Ago” is similar to a song recorded by folk groups as “The Man Who Rode the Mule Around the World.” Their originals were great, too, with influences ranging from New Orleans parades to European classical music.

Here they are on video, unfortunately cut a bit short by my batteries running out:


Pianist Zaccai Curtis and his quartet played latin jazz. I thought he sounded a bit like Hampton Hawes, and they cooked on a Mongo Santamaria number. Also in a Latin mood was Pedrito Martinez, a Cuban percussionist. The jazz content wasn’t all that high, so I’m not in a position to judge. 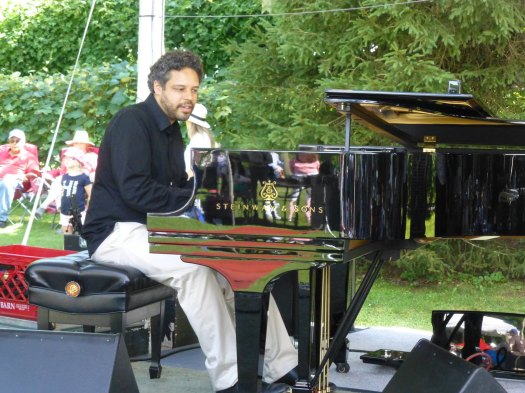 Another highlight was a solo piano set by Sullivan Fortner, during a tribute to Thelonious Monk. His work was brilliantly broad in scale, showing how Monk grew out of stride piano, but also quoting from “Surrey With the Fringe on Top” and just about everything else. As pianist Christian Sands, who had to follow him, put it, “Sullivan played all of the piano.”

And then it was time for the headliners. Helen Sung was a last-minute substitute for Geri Allen, whose passing was a major blow. Playing with the house rhythm section of Gerald Cannon on bass and Francisco Mela on bass, she heated up Tyner’s “Inception” (from his Impulse album of that name).

Craig Taborn was next, and he also gave the master’s music a good run. Tyner himself, 79 now, only played a few numbers, and notably flagged after the second one, but since we were hearing living history nobody seemed to mind.

I learned a lot of new names at Caramoor, and had a brilliant day of jazz.