With two partners, I started a record store in Fairfield, Connecticut, circa 1975. It was called Trident, because there were three partners—one of whom was my twin brother. The two of us had just graduated from the University of Connecticut, where we took not one business course.

Sally White gets a plaque from Westport First Selectman Gordon Joseloff in 2013, when her store closed. “When you think about how long I’ve been around,” said White, who was then 84, “how many can say they’ve been around 50, 60 years, doing what they love to do?” (Westport town photo)

We had a plan—we would pioneer the sale of used records in Connecticut—but beyond that we didn’t have a clue how to set up and stock a store. Fortunately, we had a friend, Sally White, then running the record haven at the downtown Westport, Connecticut department store Klein’s. Far from stocking just the hits, Sally made sure that the store was bulging with jazz—including albums from players who lived in the area, Dave Brubeck, Gerry Mulligan (and, later, McCoy Tyner and Max Roach).

We called her, and she came over to talk business. Despite the fact we were planning to compete with her, Sally held forth all evening on all aspects of dealing with suppliers, getting credit, buying a cash register, handling returns, and was endlessly helpful.

I was thought of this episode on learning that Sally White died this week. She had closed her store, Sally’s Place (which succeeded her long stint at Klein’s) in 2013—a victim of the digital revolution. I’m sure not being able to greet her many friends took something out of her—she’d sold records for 57 years! 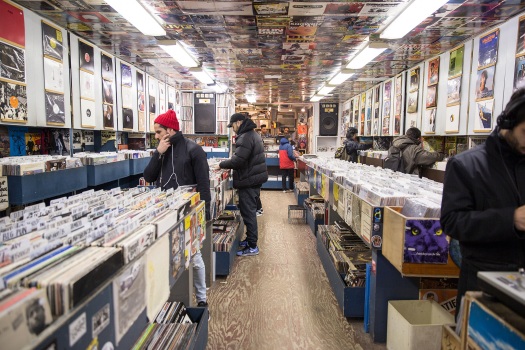 I’m part of the problem. I didn’t get down to Sally’s Place often enough, and I too started getting addicted to digital downloads. Sure, the music was cheaper that way, but nothing replaced talking to Sally in the store about her favorites—Chet Baker, Ella Fitzgerald, Duke Ellington. I once bought a June Christy record from her, and to be sure that was a purchase she approved.

Perhaps ironically, record stores are coming back as 2017 turns into 2018. For reasons that aren’t entirely clear to me, Americans are buying LPs again, even as CD sales plunge to the zero point. Around my neighborhood on the Lower East Side, there are five LP-only stories, and nary a one that sells CDs.

Noting this trend, I decided it was time to sell my stash of 1,500 LPs. I called my friends at Academy Records on 18th Street in Manhattan, and they came up and surveyed. As it happened, they offered me a very nice price, but a comparable pittance for my 6,000 CDs. Nobody wants CDs! 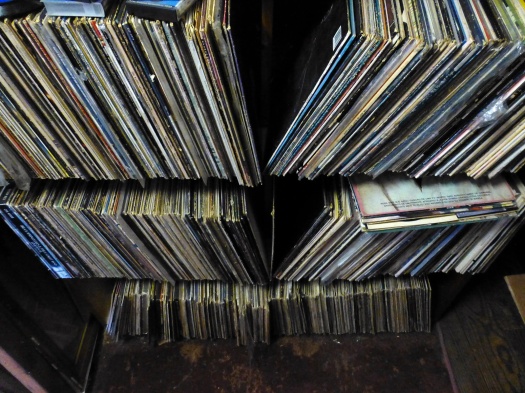 I’ve been collecting these records for about 50 years. And now it’s time to say goodbye. So long, old friends! (Jim Motavalli photo)

I’ve been collecting those records for 50 years at least. Gone, Lothar and the Hand People, gone the first Velvet Underground (with Nico) record—complete with unpeeled Andy Warhol banana. Gone the battered country music compilation I bought in a drug store when I was 14. The records are mostly rock, country and folk, since I sold the jazz albums years ago. I wish I’d held onto them a bit longer, because they’re five times as valuable now.

I can’t think of another example in which Americans have embraced an outmoded audio technology. It’s like eight-track tapes coming back. Maybe that’s next, because I’m seeing a tentative embrace of cassettes.

I asked John Corbett, the author of Vinyl Freak: Love Letters to a Dying Medium (Duke University Press), about the LP resurge. “It’s a boutique thing,” he said. “Rare records are a little more expensive and sought after. Recorded music begs to be accompanied by something—and the square record album format has the space for the full visual art, liner notes and lyric sheets. Records are cool—people like having them.”

Corbett has basically stopped collecting. He’s found most of the holy grails. When he wants to flip through records now, he goes down to his Chicago basement. I asked him if there’s anything he really, really wanted, and he mentioned a super-obscure record (pressing of 10 or thereabouts) by avant-garde British guitarist Derek Bailey. His crazy collector friend has two of them!

Vinyl Freak is a collection of Corbett’s columns from Downbeat, which lasted until 2012. The albums profiled, almost all jazz, and most exceedingly rare, are the stuff of dreams. In a half century of flicking through the bins, I’ve never seen Elmo Hope’s Live at Riker’s Island, Kenny Graham and his Satellites’ Moondog and Suncat Suites, Herbie Fields’ Sextet Live at Kitty’s, or Rufus Jones’ Five on Eight. Of course, I’m nuts enough myself to own (or have owned) about a dozen other entries in the book.

I interviewed Corbett on my WPKN radio show, and used as background music saxophonist Sonny Criss’ Sonny’s Dream/Birth of the New Cool (Prestige, 1968) with arrangements by Horace Tapscott. I’ve never seen another copy of this magnificent big-band album, but Corbett knew all about it—and waxed enthusiastic. I have it on CD, and have no burning desire to also own the vinyl, which I guess is what separates me from the true collector.

I mostly care about the music, not the object. I have 160,000 MP3s, and they’re not too cuddly, but they do have the sounds I want to hear—in a format that makes finding the exact right song very easy.

That’s progress, I guess. Goodbye Sam Goody’s, Goodbye Tower Records. It’s not likely I’ll mourn the passing of these corporate superstores, but I will shed a tear not so much for Sally’s Place, but for Sally herself. A real mensch.

Here’s a loving video tribute to Sally, by Claire Bangser:

Back to the Basics: A Portrait of Sally White from Claire Bangser on Vimeo.