WILLIAMSBURG, BROOKLYN—The first act was the Condo Fucks, which meant that you had to be a hip music person to want to go to this gig.  Yo La Tengo, in my Top Ten for rock groups, made the album Fuckbook (a nod to their earlier Fakebook) as the Condo Fucks, celebrating garage rock with some fairly obscure covers.

At Union Pool, Condo Fucks was the entire Yo La Tengo, intact, and—after taking the stage late—they burned through an ultra-compact set of vintage rockers, separated only by waves of feedback. I recognized the Small Faces and (not so obscure) the Beach Boys’ “Wild Honey.” I’m not as ardent about garage rock as most critics, but I liked the high energy of the Fucks’ approach.

After they played, the stage was cleared for 75 Dollar Bill. Rick Brown, the group’s percussionist, sat in (on vocals!) for one of the Fucks’ songs, a Kinks cover, so there was obviously some affinity there. Bill doesn’t play garage rock, far from it, but there are parallels with some of Yo La Tengo’s long, improvisational, guitar-led pieces.

From the first note, 75 Dollar Bill’s set was magical. The core is just Brown and the affable young guitarist Che Chen, but performing was the expanded band that’s on their latest album, I Was Real: Brown on plywood crate, percussion and homemade horns; Chen on guitars (and violin on one song we’ll get to later); Sue Garner (in a Shaggs t-shirt) on bass; Cheryl Kingan on alto and baritone saxophones; the indispensible Steve Maing on second guitars; and Karen Waltuch (channeling John Cale from admitted influence the Velvet Underground) on viola.

There were no solos. Come to think of it, the Condo Fucks left them out, too. It was all about adding to the pulse, hypnotizing through creative repetition, exploring the implications of simple phrases. Kingan, for example, played like no saxophonist I’ve heard before, blowing long lines (especially on her baritone) that put a deep bottom end on the compositions. 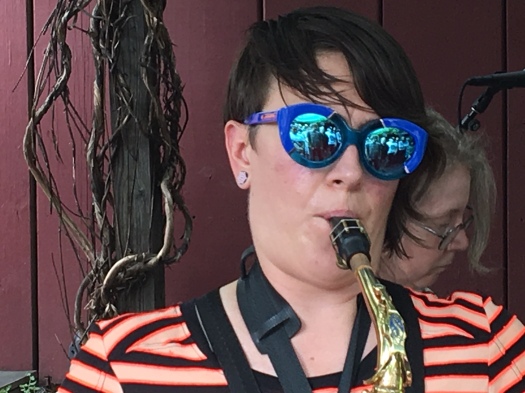 And though there is spontaneous creation here, the music is very deliberately composed. It begins quietly, as the Art Ensemble of Chicago’s songs did, builds inexorably to a full-band theme, then explores the groove upside and down (often taking 10 minutes or more to do it). This is just it for me. I can’t remember being so happy at a show. 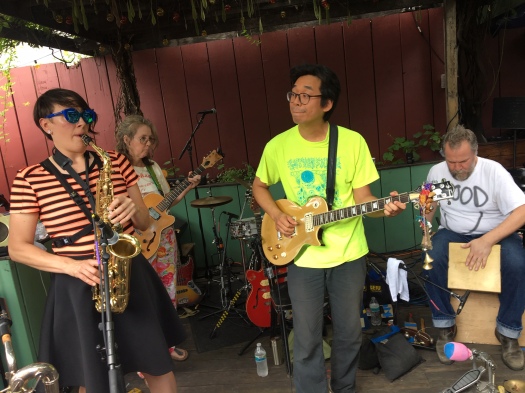 This is from the band’s bio: “Brown is a clerical worker at a law school in NYC. Che Chen was born in New Haven, CT and works for a cancer diagnostics company in Stonybrook, NY. They met via myspace and started playing together as 75 Dollar Bill approximately eight years later. Brown plays percussion and homemade horns and Chen plays electric guitar.”

The band, while hardly mainstream, seems to be getting noticed. Pitchfork and Mojo raved. The people who were lucky to be there in Brooklyn will be 75 Dollar Bill fans for life. I didn’t think they could top what they’d already done, but Brown said they had one more song, and brought up some “friends”—all of Yo La Tengo again, with Ira Kaplan on alto sax, Georgia Hubley on drums and James McNew on, well, more drums.

And the song was Ornette Coleman’s “Friends and Neighbors,” from Live at Prince Street. A perfect closer, because it’s both childlike and challenging. The performance reminded me of seeing Sun Ra’s Arkestra at the old Five Spot—the same mix of joyous, chanted vocals and wonderful cacophonous noise.

Check out 75 Dollar Bill here, and the Condo Fucks here.

Here’s a sweaty video I shot of 75 Dollar Bill in action that day: