American culture has gotten awfully homogenous lately—even radio doesn’t have much regional variation. But don’t despair that folk traditions will die out in a tidal wave of Bruno Mars and Ke$ha. As long as people like Nathan Earl Bowles are around, we’re going to be A-OK. 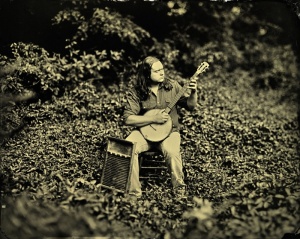 Bowles is a solo banjo player from southwestern Virginia who’s also in a band called the Black Twig Pickers. I’ve been immersed in his album A Bottle, a Buckeye. It’s an instrumental album, his tunes and traditional songs, showcasing his fingerstyle and clawhammer playing. And it’s steeped in the tradition. I’m hearing welcome strands of such giants as Mike Seeger and Dock Boggs in his music. Here is his “Ship in the Clouds”:

The Black Twig Pickers play for square dances in Virginia, and you couldn’t find a more bedrock anchor of Appalachian culture. According to this video from the Pickers, some of the couples dancing to their music have been coming to the same venue for decades:


Bowles teaches at Virginia Tech, and for some reason that made me think of Sam Beam, whose roots music career was launched while teaching film and cinematography at the University of Miami. But Iron & Wine wasn’t an influence on Bowles. He told me in an email:

I heard Iron & Wine’s first album years and years ago and enjoyed it, but don’t feel any particular affinity with him or his music. I think we’re doing pretty different things. Any “rootsy” activity of mine stems out from my activity, practice, and immersion in local Appalachian stringband culture through my other band the Black Twig Pickers. The solo banjo record is a refraction of what I’ve learned there and in the other improvised music I engage with…. and the tradition of solo fingerstyle guitar music, which grabbed me years ago and never really let go.

Bowles plays a five-string open-back banjo built by his neighbor. A Bottle, A Buckeye is front porch music, or at least it used to be when people still sat on their porches. It’s definitely beautiful, evocative and channeled from a very real place. Bowles isn’t afraid to get dissonant, though–he’s also in a band called Pelt, whose “Empty Bell Ringing in the Sky” is described as “sound rings [that] wash over the listener in hypnotically drenching waves.” It’s ominous and a bit scary–light years away from Appalachian banjo. Check out A Bottle, A Buckeye here. And here’s one more song, “Come Back, Boys, Let’s Feed the Horses”: