I’ve been reading Alan Light’s The Holy and the Broken: Leonard Cohen, Jeff Buckley and the Unlikely Ascent of “Hallelulah.” It’s good on how Cohen’s brilliant song, initially an unnoticed album cut (and not even released in the U.S. initially) gradually became a standard. Now its heard at weddings and bar mitzvahs by people who think of it as “The Shrek song.” 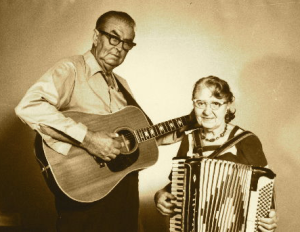 Estil C. Ball and his wife, Orna, who frequently sang with him.

These days even Leonard Cohen is getting a bit bored with “Hallelulah.” Why don’t we give it a rest? I have another candidate, from an even more obscure source. The song is a gospel number called “Trials, Troubles, Tribulations,” and it was written and recorded by Estil C. Ball in 1959, then recorded in a haunting version by Geoff and Maria Muldaur on their Pottery Pie album. Here’s that version:

“Trials, Troubles, Tribulations” is, like “Hallelulah,” based on Bible stories. Ball’s source is the Book of Revelations. The song starts with a promise of God’s wrath on Judgement Day:

Trials, troubles, tribulations
Such has never been before
When the angels pour upon us
Their vials of wrath forevermore.

The Beast with horns will come upon you
One with seven, one with ten.
Men will cry unto the mountains,
They’ll pray to die, but cannot win.

When the fire comes down from heaven
And the blood shall fill the sea
I’ll be carried home by Jesus
And forever with him be.

Trust me, it’s a haunting song, especially with the slide guitar on the Muldaur version. Here’s the original, which was collected by Alan Lomax and featured on his White Spirituals album:

OK, maybe the song isn’t quite as uplifting as “Hallelulah,” but Light makes plain that many listeners don’t really hear the lyrics to that song, anyway. It’s also true that “Hallelulah” is an elastic piece, done with as many as seven verses and as few as three. It’s easy to leave out the “naughty bits” about the narrator remembering when he “moved in you” and the parts about rooftop bathing (also Biblical) and getting tied to a kitchen chair.

“Trials, Troubles, Tribulations” hasn’t achieved wide currency, but lots of traditional music fans love it. Maria Muldaur re-recorded it in a live version (with backup singers). I’m partial to a version by the Whitetop Mountaineers, which you can hear live (with Wayne Henderson) here.

Other versions are by Andrew Bird, Joe Manning (on the excellent tribute album to Estil C. Ball, Face a Frowning World) and by Jerry Douglas with Peter Rowan.

It’s a song that will, as they say, put the fear of God into you. But it’s uplifting, too. And a darned good song!

One thought on “After “Hallelulah,” Room for Another Standard”