Joni Mitchell: “Freedom to me is a luxury of being able to follow the path of the heart, to keep the magic in your life. Freedom is necessary for me in order to create, and if I cannot create I don’t feel alive.” 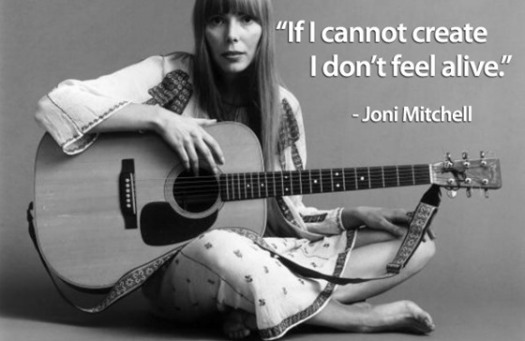 Joni Mitchell is a restless artist but not necessarily a happy one. (From Joni Mitchell: In Her Own Words)

That’s from Joni Mitchell: In Her Own Words (ECW Press), consisting of three interviews (between 1973 and 2012) by author and Canadian broadcaster/singer Marta Marom. It’s a fascinating read, though maybe entirely not in the way the author (a devoted fan) intended.

As Publisher’s Weekly notes, “The creative process is a central theme in this new book.” Mitchell is a restless soul, and intent to grow with her music, even if she loses old fans in the process. That led her to jazz and making the Mingus album, among others.

There’s nothing at all wrong with creative evolution, and Mitchell is brave for undertaking it instead of singing her greatest hits at oldies shows. I’m in awe that her path to jazz took her first to the smooth LA jazz of Tom Scott and then to the real thing with Wayne Shorter and Jaco Pastorius (with whom she made the sublime Hejira). Pause to savor that song:

But why don’t Mitchell’s choices make her happy? Why can’t she accept that her path led to a smaller (but probably equally devoted) audience?

She can’t have it both ways. Mitchell’s first five or six albums were brilliant, but also solidly in the commercial mainstream. You didn’t have to know who Charlie Mingus was to like “Big Yellow Taxi.” When she gave up that formula—as her creative mind dictated she must—the big crowds that gave her hits weren’t following behind; they bought Carole King and James Taylor instead.

Mitchell’s high standards mean she gets no pleasure from the awards heaped on her, because she says they’re just celebrating the “60s artist” she was, rather than the creative force she is now. Don’t ask her to hand out Grammys, because she dislikes most contemporary music.

Perhaps because of this, Mitchell in these interviews comes off as somewhat mean-spirited, claiming Bob Dylan and Leonard Cohen are plagiarists (hasn’t she ever heard of the folk process?), and disparaging other old friends like David Crosby (who produced her first album).