Peter Salovey may head Yale as its President, but in the Professors of Bluegrass he’s in the back row as the bass player. Actually, far longer than he’s been at Yale he’s been into bluegrass, first delving into it while an undergraduate at Stanford in the 1970s.

I got interested in bluegrass while I was in college in California. Disco was the music on popular radio, and I was looking for something else to listen to. KFAT in Santa Cruz had a show called “Cousin Al’s Bluegrass Hour,” which featured bluegrass, old time and classic country. I fell in love with the banjo, so I rented one and started learning clawhammer and the Scruggs style. When I got to Yale, Kelly Brownell—a faculty member who I jammed with—had a neighbor who was a better banjo player, and he suggested I play the bass. 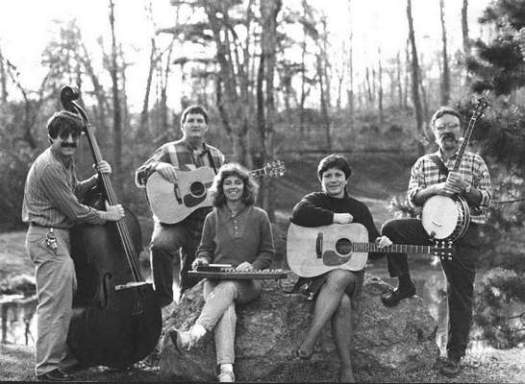 Professors of Bluegrass circa 1990s. That’s Salovey on the left, Kelly Brownell next to him.

That was back in 1990, the first flowering. A second incarnation existed from 1996 to 1999, and now this third version since 2005. The mandolin player, Craig Harwood, is the former dean of Yale’s Davenport College (now at Hunter). The fiddle player/vocalist is Katie Scharf, formerly of counsel at the White House’s Council on Environmental Quality and now Deputy Commissioner for Energy at the Connecticut Department of Energy and Environmental Protection (CT DEEP).

So it’s kind of a heavyweight group that played very high level bluegrass and old-timey music at the Connecticut Folk festival and green expo in New Haven recently. For a group of busy individuals who rarely gets together to practice, they were very tight (despite messing up the intro in this video of the Professors essaying a Bill Monroe song, “Little Georgia Rose”):


As the Professors were playing, I was startled to see a line of protesters silently observing the proceedings behind me. They were from Fossil Free Yale, a group that wants the school to divest itself of polluting stocks. A spokeswoman explained to me that this was their best time to catch Salovey in an unguarded moment. The signs targeted mountaintop removal mining because, well, the Professors’ repertoire is Appalachian music.

I’m sure President Salovey would go to the mat to defend his students’ right to protest, but on August 27, the dissidents say, “Yale rejected our proposal for divestment.”

That’s probably not the final word on the subject. According to the New York Times, Yale’s investment office recently wrote its money managers “suggesting” (not insisting) they stay away from companies that refuse to take reasonable “steps to reduce greenhouse gas emissions.” That’s progress, but I’m sure the protests will continue until the students get more tangible results. Fossil Free Yale says that 83 percent of undergraduates voted to divest in a non-binding referendum.

Divorced from politics and their heavyweight membership, the Professors of Bluegrass are just a really good band, one of the best I heard all day. It didn’t hurt that they were joined by the great Stacy Phillips on dobro–he’s one of Connecticut’s best musicians in any style. It’s too bad they play out so rarely. President Salovey was leaving right after the concert to “catch a plane at JFK.”