Ralph Stanley is often seen as a “bluegrass” artist, and indeed he deserves to be considered as one of the last pioneers, along with the late Flatt and Scruggs and Bill Monroe. But to me he’s more of an old-timey guy. Stanley’s band, featuring his grandson, Nathan, can certainly play, but the emphasis—especially when 87-year-old Ralph Senior takes the occasional lead vocal—is straight from the pre-war hills. 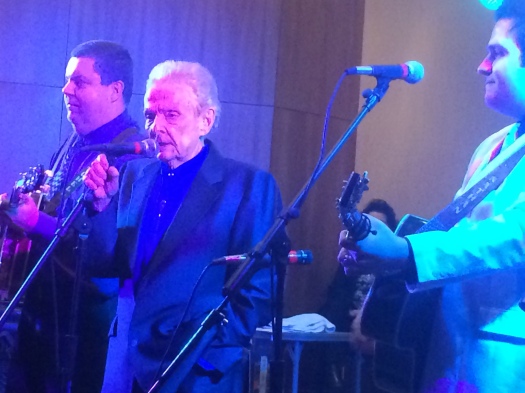 An unsmiling Dr. Ralph Stanley cranks it up in Hamden. Sorry about the blue light. (Jim Motavalli photo)

Everyone thought that Stanley was going to retire, but idleness doesn’t become him. I’ve seen Dr. Ralph several times, but it was a pleasure to renew the acquaintance in Hamden, Connecticut, where he appeared courtesy of GuitartownCT Productions. A Ralph Stanley concert is a “show,” complete with a long-established set list and twice-told between-song stories. Nathan Stanley is a fine bluegrass vocalist and front man, but time stands still when the pater familias gets in front of the microphone. No one else today sings with that piercing Appalachian wail; it’s a voice with hellhounds on its trail, with fear of the devil and an angry god in every syllable. Jeff Todd Titon of UCLA explains where it comes from:

The magnificent tone quality of Ralph Stanley’s voice was born, not made; but he learned his curves, glides, and falsetto catches as a child from hearing the music of his family’s Primitive Baptist Universalist denomination in church and at home….This obscure religious group from central Appalachia sings very much like the Old Regular Baptists; and of course the singing style and tune stock is the same mixture of English and Scots-Irish that came into the southern Appalachian Mountains with ballads and fiddle tunes, though it’s likely that some of the style’s characteristic melismata, free rhythm, and slow tempo were fashioned in a black/white musical interchange.

I’ll buy that. Throughout the concert, Stanley maintained a stern, unsmiling visage, animated only when it was his turn to sing. Without saying much at all, he was absolutely mesmerizing to watch. Catch this ambassador from a less-forgiving age while there’s still time. And here he is on video, essaying “Blue Moon of Kentucky” (the slow-fast Elvis version), from that show:

A few weeks after seeing Dr. Ralph, I had reason to affirm that the old-time tradition is alive and well. I’ve wanted to see Moonshine Holler, featuring Paula Bradley and her husband, Bill Dillof, for quite some time, and these Massachusetts residents finally appeared somewhere relatively close—Middletown, Connecticut’s Buttonwood Tree. 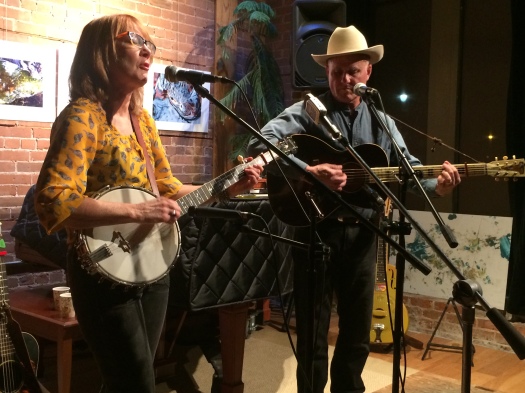 I love the boy-girl old-time format, and some of my favorite bands—10 String Symphony, The Littlest Birds, Shovels and Rope—adhere to it. Moonshine is a double threat, since both Paula and Bill have serious chops. Paula, who also loves rockabilly and is a member of Girl Howdy, is an excellent singer and plays guitar and clawhammer banjo. Bill is a consummate musicologist—he “plays the scratches” of the old 78s—and a virtuoso fiddler, harmonica, banjo player and National Steel guitarist. On a rainy night before a small but devoted crowd, Moonshine Holler ventured up and down the tradition. I loved it that they played a lot of old songs I didn’t know—if I hear “Man of Constant Sorrow” one more time, I’ll scream. Moonshine Holler hasn’t made a record, but you can check out Paula’s work with Girl Howdy. And Bill appears on the truly excellent On the Job Too Long, billed as the Cuyahogians. By the way, Paula did a splendid tap dance to their version of “Are You Gettin’ There Rabbit?” which is on that Cuyahogians album. And here it is on video: