It’s all a blur to some people, but there are some pretty significant differences between what’s called “old-time” country music and bluegrass. Listen up students, because as you may well know the countrified Bill Monroe listened to popular music and jazz (one and the same thing in the ‘40s) and melded them into something entirely new. Bent one way, the fusion produced the country swing of Bob Wills and the Texas Playboys. Twisted another, bluegrass was the result.

Old-time, which made the mainstream with groups like the Carter Family, never went away, of course, and thrives today—even in places like New York, where the Jalopy Theater in Red Hook, Brooklyn is a haven. 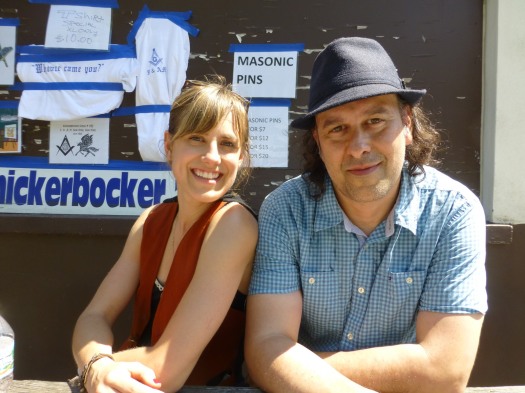 The Traveling Man Bluegrass Festival, in Tappan, New York June 15, did indeed include some bluegrass—the Jersey Corn Pickers and Buddy Merriam and Back Roads certainly qualified. But it also featured my old friends Cricket Tell the Weather, for whom bluegrass is just one arrow in the quiver—and new favorites Dubl Handi, who are old-time to the core.

Dubl Handi on stage, making it clear they love to play together. (Jim Motavalli photo)

Brooklyn-based Dubl Handi is Hilary Hawke on banjo and lead vocals, Jon Ladeau on guitar and Brian Geltner on washboard, suitcase and about half a drum kit. Hawke is out front, and she’s a hugely talented banjo player (steeped in Dock Boggs, Earl Scruggs and Mike Seeger, as well as young turks like Bela Fleck, Tony Trischka and Noam Pikelny).


Hawke is also a great, expressive singer, with her craft honed in acts like the M Shanghai String Band (saw ‘em in Yonkers once), The Me-Oh My-Ohs, and many more. One of my beefs with bluegrass sometimes is that the vocalists seem to be tonelessly ripping through the vocals (even on real weepies!) to get to the hot, many-note solos. Old-time playing serves the song. Geltner, whose background is in all kinds of music, including rock, has figured out how to play drums—rare in this music—without overwhelming the soloists.


“Hilary and I started out just friends,” Geltner told me. “She would just accompany herself. Then we started to get together to play at farmer’s markets and places like that. It sounded so good we decided to record it. That was 2011 or 2012, and we came out with our first album, Up Like the Clouds.”

Once more, with “Walking in My Sleep”:

The new one, Morning in a New Machine, came out June 10. It’s hard to pick a favorite. Both are exuberant celebrations of everything that’s great about old-time music—where the feel matters more than how many notes you play.

You were wondering about that name? “It comes from the Columbus Washboard Company’s Dubl Handi washboard from the 1800s,” Hawke told me. “It might be nice to mention also that we were named the number one bluegrass band of the year by the Village Voice last November.”

Of course, they’re not a bluegrass band, but as I said these distinctions are all a big blur to people anyway. I wish I could recommend some Dubl Handi gigs but Hawke has her summer booked playing banjo in a production of “Oklahoma” at Bard College’s Fisher Center for the Performing Arts. Click here for details.

This was the fourth annual Traveling Man Bluegrass Festival, and the very reasonably priced event was a benefit for such worthy causes as the Shriners Hospital Transportation Fund, the Association for Metro Area Autistic Children and the CJ Foundation for SIDS Counseling. The German Masonic Park is a really great venue, an old-fashioned music “grove” with permanent beer halls for the Oktoberfests and grills to make the kielbasa for the polka parties. The audience sits in the shade at picnic tables. 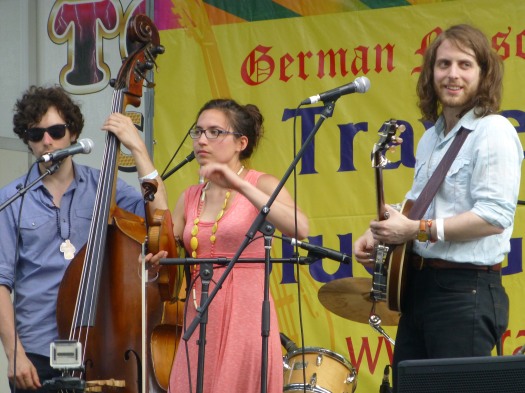 It was also a treat to reconnect with Cricket Tell the Weather as a quartet in their new incarnation, with fiddler/vocalist Andrea Asprelli clearly in charge and up front. Doug Goldstein is on banjo, Jeff Picker on guitar and Sam Weber on bass. Asprelli’s writing a ton of new songs, including this one, “If I Had My Way,” which is a smart adaptation of the old standard done by Blind Willie Johnson, the Reverend Gary Davis and others. The folk process at work!