The Green River Festival in Massachusetts, run by Signature Sounds and the low-key Jim Olsen, remains a cornucopia of amazing music from all over the world, with no boundaries. It’s not a “folk festival”—it’s a celebration of planetary music. 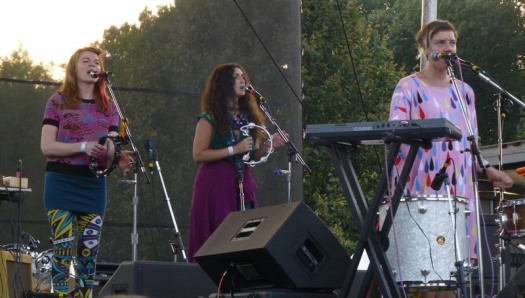 Tune-Yards are influenced by Fela and other African music, but they make something wholly original. (Jim Motavalli photo)

I attended Saturday and Sunday of the 2015 event, and it was unmercifully hot—as usual for summer festivals. But Green River is a very well-run show, so there was shade available (including for anything you wanted to see at the Parlor Room Stage), plentiful opportunities to refill your water bottle or to buy cold drinks at non-gouging prices.

Signature Sounds artists appear, of course, but don’t dominate the proceedings. The very best thing I saw this year was Tune-Yards, led by the miraculous Merrill Garbus. I’d heard Tune-Yards on record, of course, and played them a lot on WPKN-FM, but the live act was something else entirely. In person, the African influence isn’t subtle, it’s right up front, in the pair of swaying backup singers and in the drumming that undergirds everything. Garbus has said, “I spent time in Africa . . . I grew an obsession with African music, before I was in Africa and afterward.” And she’s also said that if it’s African, and it sounds like she stole it, well, she did steal it. Here’s Tune-Yards on video:

OK, fine, she stole some stuff from Fela Ransome-Kuti, but so what? Fela’s music was hardly purely African—it was spiced with an amalgam of American soul and jazz (following a trip here). And Dylan stole everything, and turned people on to some fine roots music in the process. Tune-Yards isn’t about cloning, it’s about making something new and highly inventive from vibrant roots. I liked it. I also liked how she wasn’t the star of the show; those backup singers should be called up-front singers.

Imagine this bill: Arc Iris (in video above) opening for Tune-Yards. That would shine. In fact, they both played on July 11, just on different stages. Arc Iris is a new band headed by Jocie Adams, formerly of the entirely different Low Anthem. A support player in that group—she didn’t sing lead, just backup—in Arc Iris Adams is fully up front, in costumes, yet. 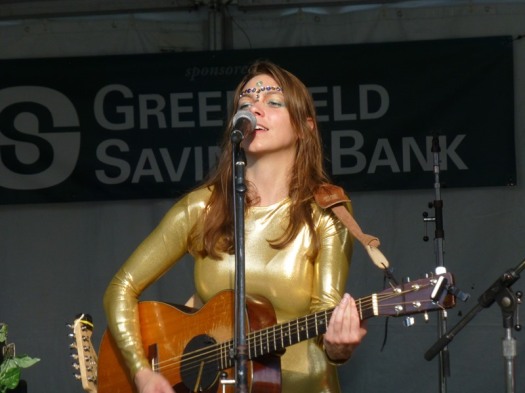 Greenfield, Massachusetts is a bucolic jeans-and-flannels kind of place, so Adams in a cape, sparkly tights and (the next day) a plastic-looking body suit was a shock to the system. But the music—otherworldly, like the house band in the Star Wars cantina—fit the clothes. The pieces stopped and started, made great stylistic leaps and took hairpin turns. Americana, it wasn’t. Jazz influences are apparent on the record, but Bjork and Kate Bush also look in. Don’t bother characterizing it—Bill Monroe said there’s good music and bad music, and I’d say this is good. 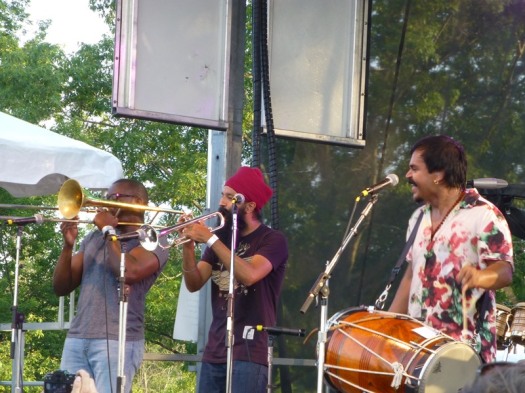 Red Baraat were another revelation, like Tune-Yards far more powerful in person than on their fine records. Take a jazz horn section and impose it over Indian percussion and vocal pyrotechnics, then add some hip-hop energy. Spicy!

Valerie June does the blues, but for the 21st century. (Jim Motavalli photo)

I’ve extolled the manifold virtues of Valerie June before, having seen her at Mass MOCA’s Fresh Grass, but she was even better at Green River.

Not all her music is strictly blues, but it’s all bluesy, maybe what Robert Johnson would be doing now if he hadn’t been so rudely murdered. 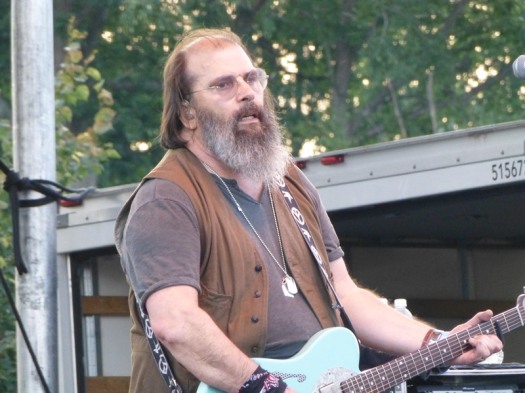 Steve Earle, with the latest incarnation of the Dukes (featuring an on-fire couple, shades of Julie and Buddy Miller, called The Remingtons) was reliably strong. Yes, he’s voting for Bernie Sanders. Like Valerie June he’s been fixated on the blues lately, but the music he played from the new album merely used that genre as an influence. No matter what he does, though, country comes through loud and clear. 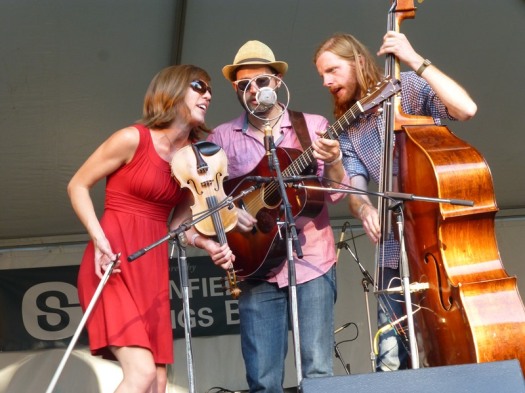 Other acts I really liked included the really young bluegrass band Twisted Pine (they met at Berklee), given points for performing a 500-year-old (they said) Childe ballad; J Mascis, heard here unplugged (but very loud, still) as on his latest album; The Stray Birds (what’s not to like about instrumental virtuousity, incredible harmony singing, and Maya de Vitry’s incredible songs?); Sean Rowe, an original solo act; and The Revelers—a Cajun supergroup. I missed Milk Carton Kids and Preservation Hall, alas. Here’s the Stray Birds on video with a duet song called “Never for Nothing”: 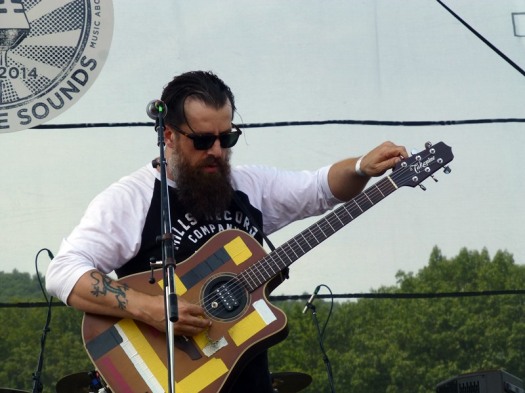 Groups that didn’t send me soaring included Punch Brothers, Langhorne Slim and Suitcase Junket. It’s all about the songs, no matter how much of a celebrity you are (Chris Thile could end up hosting Prairie Home Companion) and these folks didn’t have ‘em. 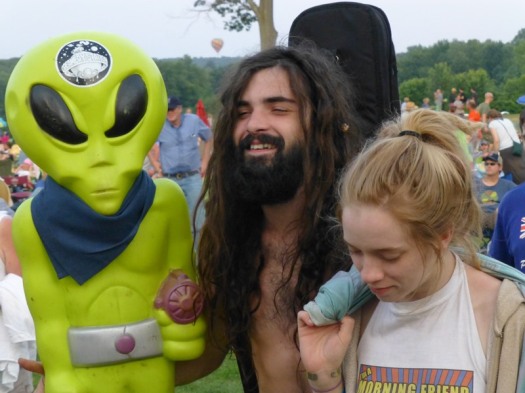 The audience gets into the spirit of the event. Aliens were welcome. (Jim Motavalli photo)

One thought on “The Green River Festival Shines With Diversity”