NEW ORLEANS AND KATONAH, NY—Ever era needs its Fats Domino. Without the Fat Man, the 50s would have been inconceivably duller. That grin, that flattop, that piano playing, those songs that sprang from but also transcended blues and R&B to hit American popular culture in its soporific core.

Nathan Williams gets his ya yas out. Maybe he’d remind you of Fats Domino, too. (Jim Motavalli photo)

Did you ever hear Fats essay the Beatles” “Lady Madonna”? I remember hearing him sing it via the scratchy transistor on the school bus. Fats’ version was a minor hit in ’68, which was poetic justice because he’d inspired it. Paul McCartney:

“Lady Madonna” was me sitting down at the piano trying to write a bluesy boogie-woogie thing … It reminded me of Fats Domino for some reason, so I started singing a Fats Domino impression. It took my other voice to a very odd place.

All this is prologue to seeing Nathan [Williams] and the Zydeco Cha Chas at the free 10th annual Louisiana Cajun-Zydeco Festival in [Louis] Armstrong Park. I was in New Orleans for a family wedding, and my wife caught the listing. Free, the Cha Chas with Steve Riley and the Mamou Playboys.

Riley’s OK, but he doesn’t rock my boat. I have an intellectual appreciation for a guy who carries on the Cajun tradition, singing in French and all that. He’s a little bantam-weight, built fellow with a period ducktail. His band played good, and Riley himself is more than competent on accordion. But nothing was transcendental.

And then Nathan and the Cha Chas. Williams actually looks a bit like Fats, and has that same confident insouciance. He’s the quintessential zydeco front man, a great singer and showman (getting down on his knees like James Brown), and on accordion he’s always right in the pocket—never flashy, always serving the song. Special mention also should go to guitarist Dennis Paul Williams, who also happens to be Nathan’s brother.

Check out this video, in which Dennis is sidelined by a breaking string, but when he comes back it’s apparent what a big contribution he makes to the Cha Chas’ music:


Nathan, whose big inspiration was Clifton Chenier, not New Orleans’ own Fats Domino, plugs into the rocking good time like no one since the late and much missed Boozoo Chavis (with whom he shared many a stage). Here’s another video of the man in action:

I really, really didn’t want Nathan’s set to end, but it did and we went for a walk down Bourbon Street, which I found absolutely appalling. Cheap commercialism, bad tourist food and worse music, panhandlers, and Larry Flynt Hustler Clubs. Plural, because there were two of them. 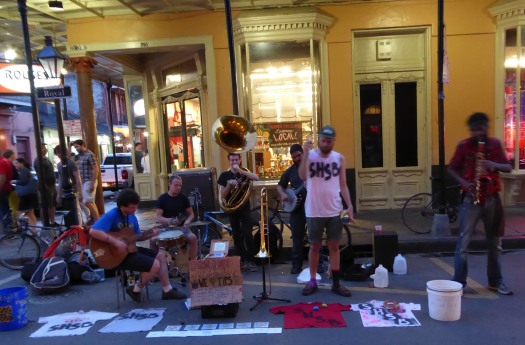 But just one block away, Royal Street was quiet and reeking of historic atmosphere. And there was street music I actually wanted to hear, from the Secondhand Street Band. A rag-tag ensemble, they were playing one of the hallowed New Orleans classics, “I Thought I Heard Buddy Bolden Say,” with great aplomb. Here’s a Royal Street video:

From New Orleans to Katonah, New York and Caramoor’s annual American Roots Music Festival. I love what Maggi Landau does with this event. Like Barbara Manners (with her superb CHIRP summer concerts in nearby Ridgefield, Connecticut) Landau’s event is all about providing a space for great young bands and singer-songwriters to be heard. 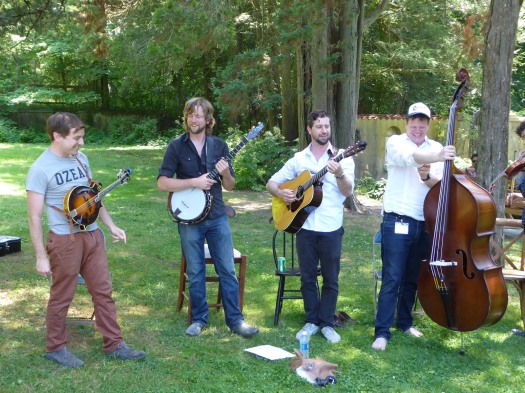 Young bands rule at the Caramoor Americana Festival. This is Man About a Horse in a sylvan setting. (Jim Motavalli photo)

All the musicians comment on how beautiful the Caramoor gardens are, and they play right in amongst ‘em, without amplification, in locations with names like Spanish Courtyard, Cedar Walk and the Founders Tent. Silver City Bound, with Sam Reider on extraordinary accordion (there’s that instrument again) greeted visitors coming in. How could he play so loud without an amplifier?

I saw several acts I’d never heard before, but want to hear again. These included High Plains Jamboree, with a singer/songwriter/mandolin player, Brennen Leigh, who could be a big star; Monica Rizzio (whose album, Washashore Girl, I quite like); Man About a Horse, an exuberant bluegrass band who trotted out the teen tragedy  “Last Kiss” but didn’t know its history before Pearl Jam (it made #2 by the Cavaliers in 1964); and the enchanting Lowest Pair, with not one, but two banjo player/singer-songwriters. Here’s their song “Rosie” from the main stage:


I can’t emphasis enough the role the sylvan glades play in this festival. Here’s music as people heard it for thousands of years, in a natural state, with very little barrier between performer and audience.

Also playing was Sara Watkins, who sounded great playing solo fiddle and ukulele on songs like “Different Drum” and “One Long Hot Summer Day,” but was less exciting with her own songs and a full band; and John Fulbright, who amazed me with a long and vividly imagistic tune called “Catfish Song.” I was only slightly disappointed when I learned that Townes Van Zandt had written it. Sorry I missed Hurray for the Riff Raff, because I love them.

Silver City Bound, by the way, just came back from a State Department-sponsored tour of Turkey and Azerbaijan. Other bands should look at spreading the word internationally like that.

One of the songs that will stick with me from Caramoor is “One to Run the River With” by Noel McKay, who did it with High Plains Jamboree. Someone should have a hit with that one. It was ringing in my ears when I left the lovely festival grounds.

One thought on “Live Music: New Orleans and Katonah, NY”