GREENFIELD, MASSACHUSETTS—Why is always so hot on festival weekends? It could have been worse—I’ve done Green River in the pouring rain. And it was still worth it! I’d have to say, though, that this is one festival that prepares for the heat. There were cool-off tents, misting areas, and lots of water stations provided by Klean Kanteen. The community college site also has some welcome shady areas, refuges to avoid sunstroke. 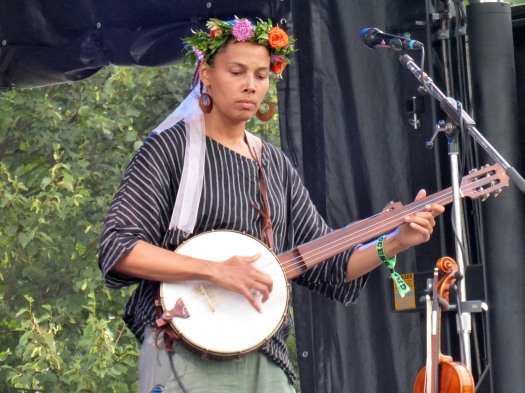 The music was hot, too. I got there on Friday night, just in time to see Lucinda Williams. She was personally in fine form, but I continue to have problems with the volume of her Buick 6 backing band, which can drown out the subtleties baked into the songs. Other artists, including Courtney Barnett, have disappointed in that way. Stuart Mathis, who tours with Williams (and plays on her records) is a fine player, but he belongs in a rock band. 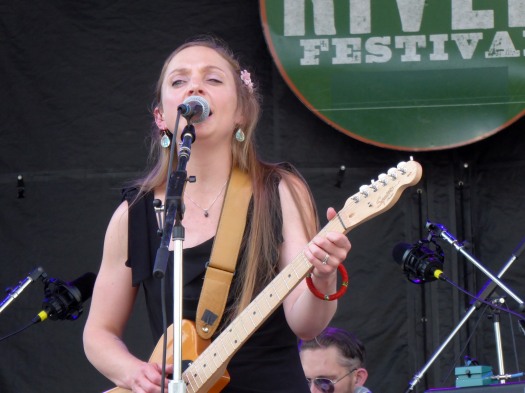 Eilen Jewell: one of the best singer/songwriters we have, with great stage presence too. (Jim Motavalli photo)

Saturday dawned clear and hot. I made it onto the field in time to see a short set by Little Roots, a local duo of Annie Stevenson and Maggie Shar. I loved them—the guitar and banjo combination, the sweet harmonies. And the repertoire of “Train on the Island,” “Green Leafy Garden” (which they said was derived from “Ida Red”), a Dolly Parton song named “Applejack” and the redoubtable “Jenny Jenkins.” But why, since there were two of them, didn’t they split up the vocal duties? It’s a call and response. 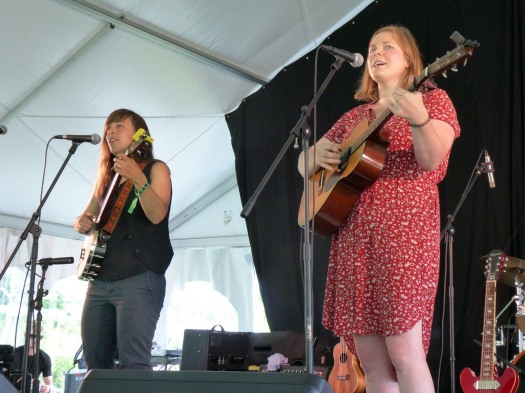 Little Roots are music teachers when theiy’re not performing around the Pioneer Valley. (Jim Motavalli photo)

A trio of duds on the main stage: Pamela Means, a supposed jazz singer who was earnest but tuneless; the Record Company, which produced an ear-piercing blare without much coherence; and the Philadelphia-based Low Cut Connie, who were loud and aggressively awful, without a memorable song to call their own. Frontman Adam Weiner said he “loved” us after every song. That alone was a bad sign. 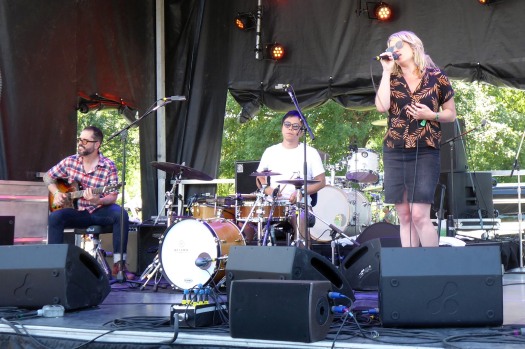 That morning, in our Airbnb, I had enjoyed the owner’s collection of country vinyl. I put on a Porter Wagoner live album, which reproduced their stage show circa 1964. It had it all: Fast instrumentals, comedy (from the colorfully dressed bass player), female vocals (from the “lovely Norma Jean”), solid singing and hosting from the front man—and songs, lots of very good songs. There was quality control in those days. Vigilantly weeding out bad songs is the duty of every band and solo act. 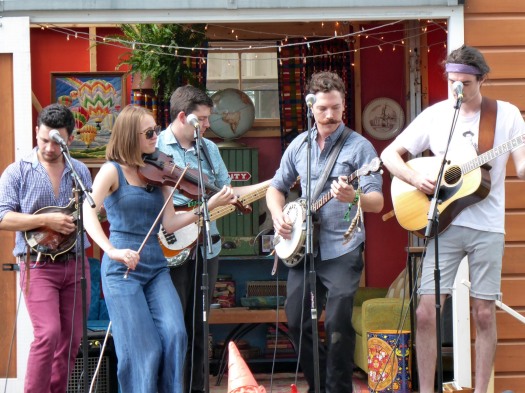 Equilibrium was restored with a performance by Mamma’s Marmalade, a Northampton bluegrass-based band with strong original songs, instrumental prowess and charisma. Fiddle player and singer Lily Sexton is a good front person. The new album is Rockabee Fields. 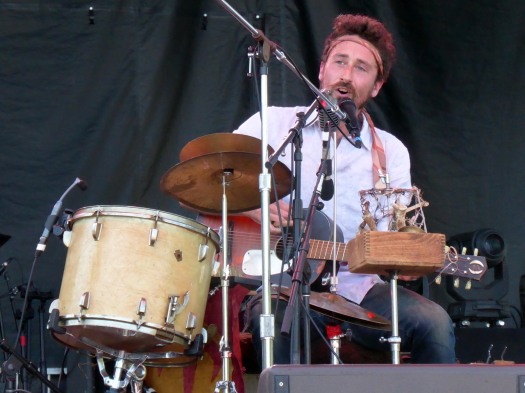 The Suitcase Junket is always fun. One-man band Matt Lorenz has insane energy, and sweats buckets to put his songs over (now there’s a concept). He seems to have evolved from banging on his suitcase to an actual drum kit of sorts, and in Greenfield he brought out his sister, Kate, to sing harmonies. Not all his songs connect, but most of them do—especially the ones with singable choruses. The new album is Mean Dog, Trampoline. 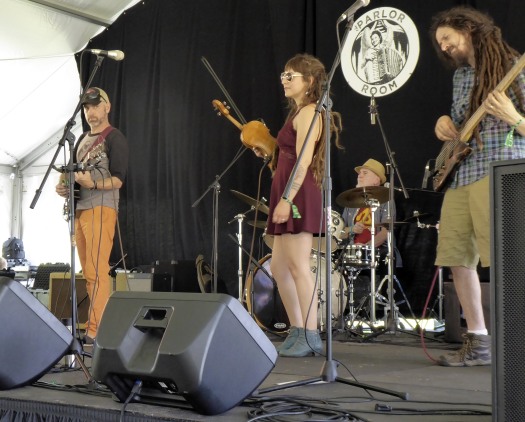 Gaslight Tinkers: You came for the dreadlocks, but stayed for the songs. (Jim Motavalli photo)

Well-known axeman Charlie Hunter has a duo (plus a Japanese drummer) with singer Lucy Woodward. She’s has a big soul voice, Etta James meets Janis Joplin, and really puts everything into her songs, conviction plus body English. She was so forceful it almost overshadowed the beaming Hunter, who nonetheless got in some slinky solos. 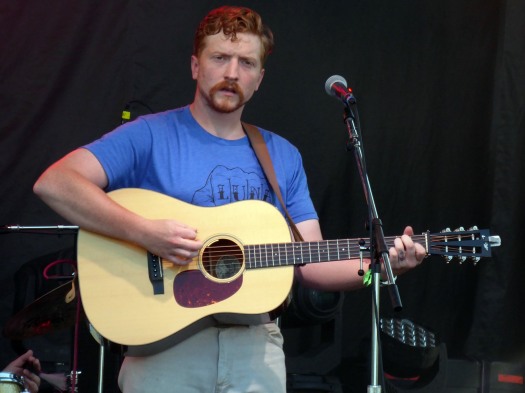 Tyler Childers played old-school country, which segued into pounding rockers in the modern Nashville manner. At his best, he’s a very good singer and songwriter. 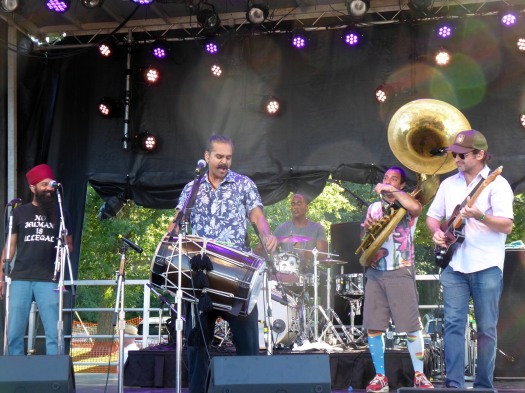 Red Baraat, return visitors to Green River, almost levitated off the stage. Whatever the source material—some are originals, one was “an old Punjabi song”—it’s performed with rhythmic intensity, pounding drums and a tuba for bass. What, it wasn’t a tuba but a sousaphone? The Lowdown Brass Band are similar, if with a New Orleans flavor, and were equally intense—with two excellent singers, R&B and rapper—to the fore. 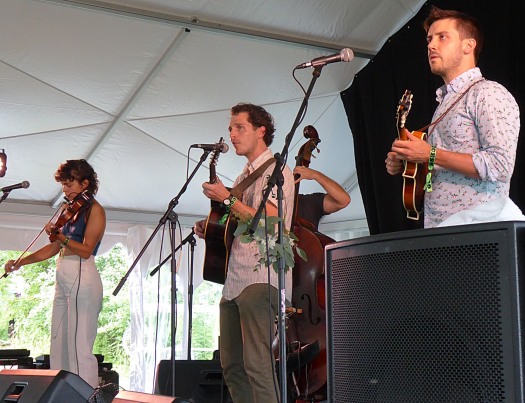 The East Pointers, from Prince Edward Island, had both instrumental prowess (including fiddle-led rave-ups) and good songs, plus funny patter about PEI. They quoted from the local paper: “Rogue Beavers Invade Town” was one headline. This was my wife’s favorite festival band. 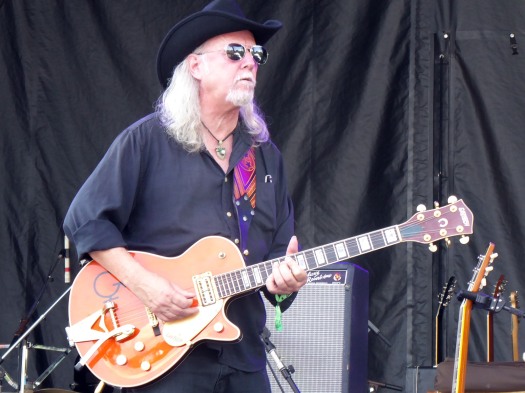 Jerry Miller, the one and only. No, not the Moby Grape guy. (Jim Motavalli photo)

Festivals are best when they introduce you to bands you’ve never heard before, and the Brattleboro-based Gaslight Tinkers was one of them this year. My impressions: dreadlocks, congas, electric bass, jigs, a tragic kids’ song, Emerald Rae’s fiddle. The Spanish song wasn’t their best. Cedric Burnside was solo, a bit stark but effective. He’s not as raw as granddad RL, but still did a song whose lyrics included, “Isn’t it just like a woman/they’ll do it every time.”

The major highlight of the festival for me was the performance by Eilen Jewell, promoting her new album, Gypsy, out in August. This is one of the best singer-songwriters performing today, and if you don’t know her music you owe it to yourself to change that fact. Jewell is an ace interpreter of classic songs—bringing them to live the same way a Carmen McRae or Anita O’Day would—but she’s also a wordsmith who can take your breath away. A highlight for me was the moody “Santa Fe” from Queen of the Minor Key. 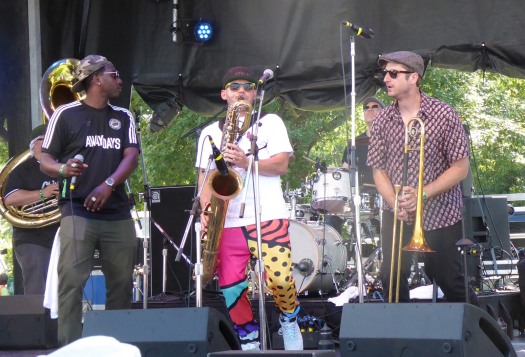 Jewell has long worked with husband Jason Beek ably holding down the drum chair, and wild man “Stone Cold” Jerry Miller on guitar. Miller is, for my money, one of the best guitarists in any genre working today. His playing encapsulates every rockabilly, country, bluegrass and roots style—sometimes in the course of a concise one-minute solo. He has his own album out, New Road Under My Wheels. Jerry says, “These are players that I remember slowing down the record to figure out: Grady Martin, Leon Rhodes, Roy Nichols, Billy Kirchen, Joe Maphis, Les Paul. Also Scotty Moore, Cliff Gallup.” 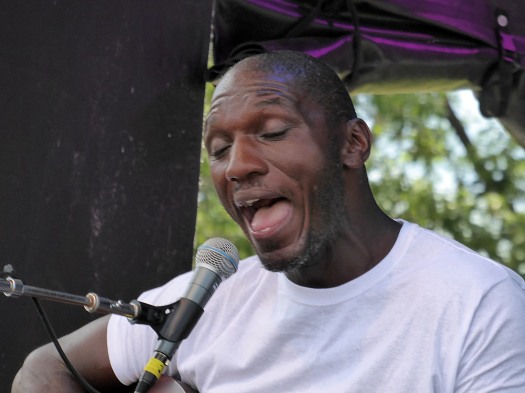 Next up was Rhiannon Giddens, who was just as good, performing –as on her latest, 2019 album, There is No Other—with multi-instrumentalist Francesco Turrisi. I wrote down, “She was always good, but now she’s commanding the stage.” If the festival was just those two women, I would have gone away happy. Giddens’ talent on fiddle and banjo sometimes gets overshadowed in large-band settings, but Turrisi (leaping from accordion to piano to Persian hand drums) was just perfect for her. She said their collaboration is “just getting started.” Good. He was funny, too. As she is. 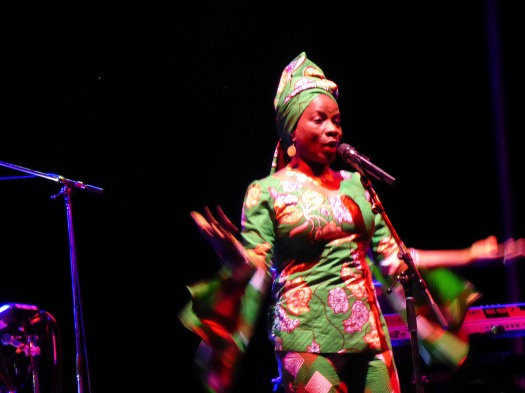 I caught a few songs from Chapel Hill’s Mipso, including a lithe cover of “Diamonds on the Soles of her Shoes,” and liked what I heard very much. There are three good singers, and fine original songs. Their most recent album is Edges Run from 2018.

I’d have liked to hear more of Angelique Kidjo’s performance. She’s an African export worth hearing, and delivered a strong empowerment message. I wanted to hear more of Talking Heads’ “Remain in Light,” but caught only one song. Her next album (after the Heads tribute) salutes singer Celia Cruz.

Artists that sounded interesting that I missed: The Devil Makes Three (liked them in the past), Heather Maloney (didn’t like her in the past), Mapache, Phillip B. Price, Parsonfield, Samantha Fish, Spanglish Fly, Fantastic Negrito, The Suffers, Dez Roy, Moving Day, Zoki, the Stone Coyotes, Home Body.

One thought on “Hot Stuff at the Green River Festival 2019”